On the fourth-floor lobby wall of the International Center for Spinal Cord Injury are these words: “In my mind, I am full of hope.” In April 2019, having spent three weeks in UMMC’s Shock Trauma Center, followed by six weeks at the Kessler Center for Rehabilitation in West Orange, New Jersey, I found myself sitting in that lobby reading those powerful, affirmative words. Yes, indeed, in my mind, I was full of hope. But what tangible form that hope was going to take was still unknown.

On January 18, 2019, as I was making my way to work and while stopped in a line of traffic, my vehicle was rear ended. I sustained life-threatening injuries and was taken to UMMC’s Shock Trauma, arriving within the “golden hour.” An emergency thoracotomy to stop internal bleeding in my chest was followed the next morning by back surgery to stabilize my T8 and T9 vertebrae. Both surgeries were successful. A decision had been made not to repair the tear in my aorta, fearing surgery would do more harm than good. By Saturday afternoon, about 30 hours after the accident, my family believed I would walk out of Shock Trauma alive and whole.

On Sunday afternoon, however, a pulmonary embolism appeared on an MRI scan. By Sunday night, I had very little voluntary movement in my left foot and none in my right. The doctors had no definitive explanation for it. Thus, just three days after the accident, it became apparent that paralysis had set in from T8 down, and I was a paraplegic. But that’s when the miracles began.

A friend who is a physical therapist specializing in spinal cord injury got in touch with my wife and strongly urged that upon release from Shock Trauma, the best rehabilitation placement was the Kessler Center for Rehabilitation in West Orange, New Jersey. At my wife’s insistence, I was transferred there on February 8.

I arrived at Kessler on a Friday afternoon and was quickly evaluated to determine the best course of physical therapy. I was scheduled for one hour of occupational therapy, two hours of physical therapy, and one hour of group therapy daily. Initially, I could not sit up by myself. My core muscles were paralyzed, too. I had to be lifted by machine from bed to bath to wheelchair. I was totally dependent on someone else to perform six of the seven activities of daily living. I lost all dignity and privacy. In a short time, I had gone from being a person who, from the age of 11, had taken care of myself, to being someone who had to rely on others. Looking back, I see that it was my determination to become independent again that helped me make the most of my time at Kessler.

As days turned into weeks, I found that I could get my core muscles moving. I could sit up by myself. I could use the parallel bars to support my weight and stand unassisted. By the time I was ready to be discharged, I had made gains that no one initially thought possible. At the exit interview with my physiatrist, Dr. Jeremiah Nieves, he told me, “I cannot prove it or guarantee it, but I feel strongly, based upon the improvements you have made to date and the recovery progress of other patients in my practice, I believe you will walk again.”

Once home, I began what turned out to be five weeks of both outpatient occupational and physical therapy. I also had an appointment with Dr. Philippines Cabahug, a physiatrist at the International Center for Spinal Cord Injury. It was while waiting in the ICSCI lobby for that initial assessment by Dr. Cabahug that I took to heart the words, “In my mind, I am full of hope.” I was still anxious and concerned, though. I had been through three months of intense hospitalization. I had made great progress toward overcoming the paralysis, but in my mind, I questioned whether healing and improvement could continue.

During my appointment, Dr. Cabahug told me that I was an ideal candidate for physical therapy at ICSCI. The challenge, however, was finding an opening in the treatment schedule given the long list of applicants. She promised to be in touch with me within two weeks. Dr. Cabahug was true to her word and went one better. She told me there was an unexpected opening and, beginning on May 8, I would come to ICSCI for both physical and occupational therapy.

I was pleased to return to an environment where various therapeutic and rehabilitative devices were readily available. Equally powerful and significant was the fact that I was not alone in my physical challenges. I was surrounded by individuals with whom I shared the designation of paraplegic. Yet we each had unique circumstances that put us in wheelchairs.

From my introduction to my primary therapists, Rebecca Shark (occupational therapy), Terence Regler (physical therapy) and Beth Myers (physical therapy), it was apparent that I was a person, far more than just a human body diagnosed with a condition. I was treated with respect. The rationale was given for every exercise I engaged in or any treatment I received. I was given information telling me how my brain was controlling and interacting with my paralyzed body. I was told I could indicate when I needed a break. My mind was full of hope. One goal was reached and immediately there was another milestone put into place for the next step forward.

I began therapy at ICSCI with limited strength and very little movement from my waist down. At first, therapy was focused on stretching and building core strength while on a mat. I progressed to using the parallel bars to gain and maintain a standing position.

Next was the RTI cycle, followed by the MyoCycle which, through electrical stimulation, awakened my muscles. I was so excited when I became able to isolate a muscle and intentionally use my brain to move it! I was then introduced to the G-EO, which simulated the walking process robotically and literally put one foot in front of the other. That was followed by the Andago, which allowed me to walk freely around a room while being fully supported. The TheraStride was next, enabling me to walk on a treadmill with arms swinging freely. Most recently, I have been walking with Lofstrands while needing only limited support of the harness. Simultaneously, I began aquatic therapy and began using a walker to walk within the gym setting, then in the garden outside Kennedy Krieger, and then in my home. I was seeing my hopes turn into completed actions. 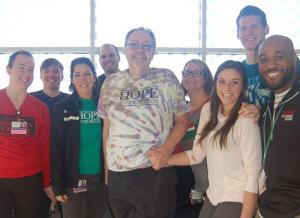 I am also full of hope because of the support staff of technicians who serve at ICSCI. Many of these are young students who are contemplating professional careers in physical and occupational therapy. Being in their company and witnessing firsthand their desire to pursue a career enhancing the lives of others, and not just themselves, is heartwarming. Their youthfulness in concert with their gentleness and patient-centered approach is an inspiration to all. Their ability and willingness to supplement the efforts of the senior staff is phenomenal. Reciprocally, the senior staff’s cooperative and respectful mentoring of these prospective therapists instills within them a healthy work ethic preparing them for a marvelous career.

I have just celebrated my 65th birthday. After much contemplation, I have resigned my position as chaplain of a continuing care retirement community, sensing that functioning in a full-time capacity will remain beyond my purview. However, I am full of hope because the therapy I have received to this point has miraculously conditioned me to live far surpassing my initial post-injury dreams.

The road ahead is still uncharted for me. My spinal cord injury was incomplete. How, and to what extent, my body will ultimately heal is still unknown. But I do think that treatment of spinal cord injury is in its infancy, and I look forward to a continued relationship with ICSCI with hopes of even further improvement of my condition. I am full of hope because of where I have been, where I am now, and where I will ultimately be. I am full of hope for my future.