Sturge-Weber syndrome is a rare disease where abnormal blood vessels in the brain, skin and eye can cause seizures, paralysis, strokes, migraines, learning problems, vision loss, and other health issues.

We are now offering telehealth/video visits.

Objective: Port-wine birthmark (PWB) is a common occurrence in the newborn, and general pediatricians, dermatologists, and ophthalmologists are often called on to make an assessment of risk for Sturge-Weber syndrome (SWS) due to workforce shortages in pediatric neurologists and MRI's low sensitivity for SWS brain involvement in infants. We therefore aimed to develop a quantitative EEG (qEEG) approach to safely screen young infants with PWB for SWS risk and optimal timing of diagnostic MRI.

Methods: Forty-eight infants (prior to first birthday) underwent EEG recording. Signal processing methods compared voltage between left and right sides using a previously defined pipeline and diagnostic threshold. In this test sample, we compared sensitivity/specificity of the qEEG metric against MRI performed after the first birthday. We also used likelihood ratio testing to determine whether qEEG adds incremental information beyond topographical extent of PWB, another risk marker of brain involvement.

Conclusion: qEEG adds information to risk prediction in infants with facial PWB. Significance: qEEG can be used to help determine whether to obtain an MRI in the first year of life. The data collected can assist in developing a predictive model risk calculator that incorporates both PWB extent and qEEG results, which can be validated and then employed in the community.

This manuscript summarizes the latest neurologic treatment trends and recommendations

Abstract:
OPINION STATEMENT: We try to see the babies prior to the onset of symptoms so that their parents can receive anticipatory guidance regarding seizures and how to recognize and respond to them and so that proper referrals to ophthalmology can be made. If there is any concern on history, exam, or EEG then we obtain a magnetic resonance imaging (MRI) with contrast. If presymptomatic diagnosis of brain involvement is made then treatment with low-dose aspirin is offered and if the brain involvement is extensively bilateral then an anticonvulsant such as levetiracetam is offered as well. Seizures are treated aggressively with a goal of obtaining and maintaining complete seizure suppression as much as possible often with a combination of low-dose aspirin and two anticonvulsants such as levetiracetam and oxcarbazepine. For many patients, this will provide adequate control of their seizures and stroke-like episodes. If the patient fails medical management and seizures are regular and accompanied by plateaued development, significant hemiparesis and visual field deficit and the patient is unilaterally involved and a surgical candidate then surgical management is urged. When the seizures are less regular, little or no hemiparesis or visual field deficit exist, and development is reasonable then this decision is more difficult. For bilaterally involved patients surgery is usually not a good option unless seizures are very severe and mostly coming from one side. Other therapeutic options include the ketogenic/Atkins diet and vagal nerve stimulator although in our experience these usually do not result in cessation of seizures. Endocrine problems occur with increased frequency and must be treated when they are present. The recent discovery of the somatic mutation causing Sturge-Weber syndrome holds promise for new treatment options in the future.

This study demonstrated that optical coherence tomography can quantify eye involvement with the vascular malformation in Sturge-Weber syndrome and may be useful as a biomarker in clinical care and drug trials.

Abstract:
IMPORTANCE: With the recent development of enhanced depth imaging spectral-domain optical coherence tomography (SD-OCT), it is now possible to measure choroidal thickness in patients with Sturge-Weber syndrome and detect abnormalities that are not visible as part of the fundus examination.

CONCLUSIONS AND RELEVANCE: The advent of enhanced depth imaging SD-OCT has allowed us to quantify choroidal thickness in the posterior pole, even in eyes with a markedly thickened choroid, such as those found in individuals with Sturge-Weber syndrome. Spectral-domain OCT has a much higher resolution (5-10 μm) than B-scan ultrasonography (150 μm) and can be used to distinguish between the retina and the choroid. Furthermore, enhanced depth imaging SD-OCT can detect choroidal thickness in eyes without clinically apparent choroidal abnormalities.

Abstract:
Sturge-Weber syndrome (SWS) consists of a capillary-venous vascular malformation of the brain, skin and eye. Urine vascular biomarkers have been demonstrated to be abnormal in other vascular anomalies and to correlate with clinical severity and progression. The current study investigated the use of urinary matrix metalloproteinase (MMP)-2, MMP-9, vascular endothelial growth factor (VEGF), and basic fibroblast growth factor (bFGF) levels to non-invasively monitor the progression of SWS. Fifty-four urine samples were collected from patients seen at the Hunter Nelson Sturge-Weber Center at Kennedy Krieger Institute. Urine was analyzed for MMP-2, MMP-9, VEGF and bFGF levels and correlated with clinical outcome at the time of urine collection (n = 48) and 1 year following urine collection (n = 22). Analysis revealed that MMP-2 (p = 0.033) and MMP-9 (p = 0.010) were significantly more likely to be present in the urine of SWS subjects compared to controls and that bFGF was significantly more likely to be present at abnormal levels (p = 0.005). MMP-2 correlated with a more severe clinical score at the time of urine collection, while both MMP-2 and MMP-9 levels correlated with greater disease severity at time of collection. bFGF levels correlated with improved clinical score 1 year after urine collection. These results suggest that MMP-2 and MMP-9 levels may be useful in assessing SWS progression, as well as indicating which patients might benefit from more aggressive treatment, while bFGF levels may be useful in judging the efficacy of neurologic treatment in SWS.

This study determined what types of ENT issues most affect patients with Sturge-Weber syndrome and identified symptoms and issues that should be screened for and evaluated in order to optimize neurologic outcome.

This research found that transcranial doppler is a safe way to measure blood flow abnormalities in SWS suggesting that it may be useful for tracking response to treatment in a clinical trial or monitoring progression in SWS. 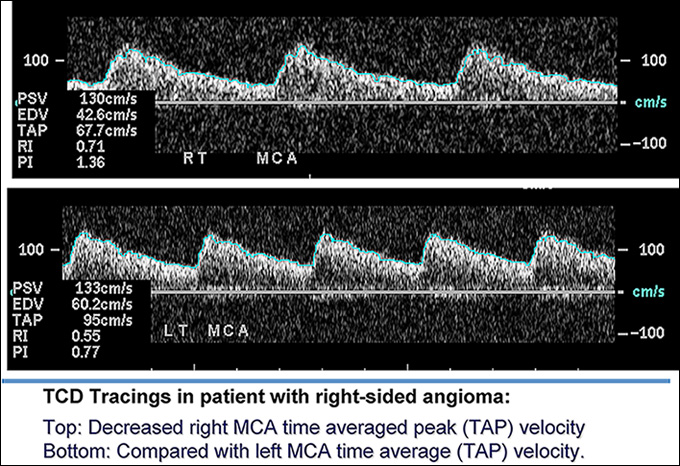 This novel research found that decreased power by quantitative EEG analysis on the affected brain side of patients with SWS correlated with the severity of neurologic involvement. These findings indicated that quantitative EEG was likely to be useful for the early diagnosis of SWS and for monitoring progression and treatment response in a clinical trial.

More Information
PURPOSE: Sturge-Weber syndrome (SWS) is a neurocutaneous disorder with vascular malformations of the skin, brain, and eye. SWS results in ischemic brain injury, seizures, and neurologic deficits. We hypothesized that a decrease in quantitative EEG (qEEG) power, on the affected side, correlates with clinical severity in subjects with SWS. METHODS: Fourteen subjects had 16-channel scalp EEG recordings. Data were analyzed using fast Fourier transform and calculation of power asymmetry. Blinded investigators assigned scores for clinical neurological status and qualitative assessment of MRI and EEG asymmetry. RESULTS: The majority of subjects demonstrated lower total power on the affected side, usually involving all four frequency bands (delta, theta, alpha, and beta). qEEG asymmetry correlated strongly with neurologic clinical severity scores and MRI asymmetry scores. qEEG data generally agreed with the MRI evidence of regional brain involvement. In MRI-qEEG comparisons that did not agree, decreased power on qEEG in a brain region not affected on MRI was more likely to occur in subjects with more severe neurologic deficits. CONCLUSIONS: qEEG provides an objective measure of EEG asymmetry that correlates with clinical status and brain asymmetry seen on MRI. These findings support the conclusion that qEEG reflects the degree and extent of brain involvement and dysfunction in SWS. qEEG may potentially be a useful tool for early diagnosis and monitoring of disease progression in SWS. qEEG may prove useful, in severely affected individuals with SWS, for determining regions of brain dysfunction.

This work demonstrated that perfusion MR deficits correlate with the severity of neurologic impairment in SWS indicating that it will likely be useful for tracking response to treatment in a clinical trial and neurologic progression.

More Information
PURPOSE: To investigate physiological alterations in Sturge-Weber syndrome (SWS) using MR perfusion imaging (PWI) and proton spectroscopic imaging (MRSI), and their association with neurological status. MATERIALS AND METHODS: Six consecutive patients with a clinically established diagnosis of SWS underwent MRI using a 1.5 Tesla scanner. The protocol consisted of conventional anatomic scans, dynamic PWI, and multislice MRSI. A pediatric neurologist evaluated the neurological scores, and the imaging results were correlated with neurological scores using nonparametric correlation analysis. RESULTS: Two patients had classic neuroimaging findings of unilateral cerebral atrophy with corresponding leptomeningeal enhancement and hypoperfusion (prolonged mean transit time). Two patients had bilateral disease, and two had normal symmetric perfusion. Among clinical measures, the highest correlation was between hemiparesis index and hypoperfused tissue volume (Spearman's correlation coefficient, rho = 0.943, P < 0.05). There was also a trend of correlation, although not statistically significant (P = 0.06), between the hemiparesis score and the NAA/Cr ratio in the mid to posterior centrum semiovale, lateral gray matter (GM), and splenium. CONCLUSION: In SWS, PWI indicates cerebral hypoperfusion predominantly due to impaired venous drainage, with only the most severely affected regions in some patients also showing arterial perfusion deficiency. The extent and severity of the perfusion abnormality and neuronal loss/dysfunction reflect the severity of neurological symptoms and disability, and the highest correlation is found with the degree of hemiparesis. These parameters may be useful as quantitative measures of disease burden; however, further studies in larger number of patients (and with a more homogeneous age range) are required to confirm the preliminary findings reported here.

This study validated the new SWS neuro score against measurements of brain atrophy indicating that the SWS neuro score should be useful for research and as an outcome measure for clinical trials.

This research reported on the new MR perfusion imaging showing in SWS that the abnormal vasculature results in severely impaired venous drainage from the involved region resulting in arterial perfusion deficits in that region.

More Information
We report the case of a 9-month-old boy with Sturge-Weber syndrome and new onset of seizure. Perfusion MR imaging showed early changes compatible with impaired venous drainage in the affected hemisphere, whereas proton MR spectroscopic imaging revealed a focal parietal area of elevated choline without significant alteration of N-acetylaspartate levels. The perfusion and subtle metabolic abnormalities are comparable with the extent of the overlying leptomeningeal enhancement, illustrating the early pathophysiological manifestation of this disease.