Greg had been training for weeks for the 2015 Rock ‘N’ Roll Virginia Beach Half Marathon and seemed in perfect health. But when Greg was within a few hundred feet of the finish line, he went into cardiac arrest and collapsed.

Running a few paces ahead of him in the race was Adrianna Amarillo, a medical resident. When she heard someone call for medical help, she turned around, ran to Greg, and performed CPR until a medical team arrived to airlift him to the hospital. But because of the prolonged lack of oxygen to his brain, Greg sustained a severe brain injury.

Later that evening, Amarillo went to work and saw Greg in her ICU. Greg’s mother, Stephanie Watson, says that Amarillo had found an angel pendant on the road a few months earlier. After someone said “you must be his guardian angel,” she remembered the pendant and gave it to Greg.

After being treated at a cardiac and acute care hospital, Greg was transferred to Kennedy Krieger’s inpatient Brain Injury Rehabilitation Unit, which brings together a team of specialists from multiple disciplines to help patients recover after brain injury. When he arrived, he was in a coma-like state, unable to move, speak, eat, or track with his eyes. 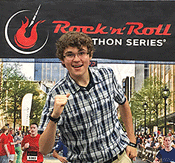 His inpatient team at Kennedy Krieger implemented a treatment plan, and Greg’s family saw him slowly progress. Little by little, he began showing signs of cognition. “I could tell from the sparkle and the look in his eye that he was back, that he was understanding and recognizing us,” recalls his mom. Then he wiggled his finger. He learned to put his mouth together like a kiss and move his eyebrows. They were small signs, but monumental moments for his family.

He spent his 18th birthday and Christmas in Kennedy Krieger’s inpatient unit. By January, he was stable enough to move to the Specialized Transition Program (STP) at Kennedy Krieger, a day program where he could continue receiving intensive daily therapy and medical care without hospitalization.

At STP, Greg receives speech, physical, and occupational therapies, and works with a neuropsychologist to help him cope with the changes caused by his injury. He participates in a life skills group with peers, works on school assignments with a teacher, and eats lunch with others in the program.

“Kennedy Krieger is like a symphony in motion, with all of the different services cooperating together to work as a team to heal Greg.”

Music and acting are never far from his mind. When asked to think of a really hard word during therapy, Greg responded with “supercalifragilisticexpialidocious” from the musical “Mary Poppins.” His therapists incorporate music and movement into his therapies to give him an extra boost of motivation. 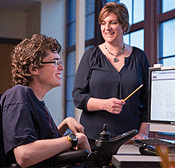 “Greg’s goal is to get back on the stage singing and dancing, and we would all love to get him as close to that as we can,” says Lynnley Moore, Greg’s speech-language pathologist.

They are working on singing lyrics to some of Greg’s favorite songs and practicing play scripts to help improve Greg’s breath support and speech.

During a recent visit home, Greg was thrilled to see his friends during a service at his school’s chapel. “Being back in that environment was just overjoying to him,” says his mom, “and it was wonderful for me to see all the love and support for him." 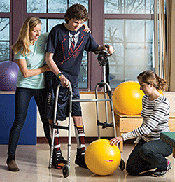 Although Greg has limited mobility on his left side, he is making steady gains. He’s learning to get around in a power wheelchair and can walk short distances with a gait trainer. He is learning to eat and drink, and can now say a few words, though he has difficulty coordinating the muscles in his mouth. He has also learned to use a communication device. The team continue to work on his cognitive objectives and coping goals, and will help the family with educational and community resources after discharge.

Though it’s been a long and difficult journey, the family’s strong faith has sustained them. “Greg has a special purpose,” his mom says. “His story is still being written—we don’t know what it’s going to be, but we know it’s going to be amazing. He is going to do even bigger things than what he planned on doing.”