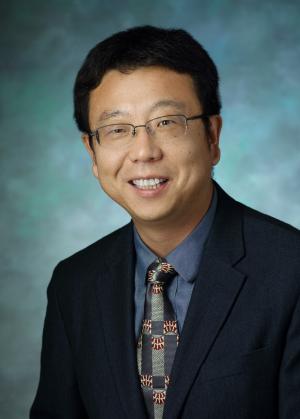 Guanshu Liu, PhD, is an associatepProfessor in the Russell H. Morgan Department of Radiology at Johns Hopkins University School of Medicine and F.M. Kirby Center at Kennedy Krieger Institute. Dr. Liu received his bachelor’s degree from the University of Science and Technology of China (USTC) in 1998 and Ph.D. degree from the Department of Biomedical Engineering at Case Western Reserve University in 2008. He then joined the Department of Radiology at Johns Hopkins University School Medicine first as a Research Associate under the supervision of Dr. Peter van Zijl, and then instructor (2010 - 2012), Assistant Professor (2013 - 2017), and Associate Professor (2017-present).  Dr. Liu is the PI for a number of projects sponsored by NIH (R01, R21, R03) and NMSS, and the recipient of Johns Hopkins Discovery Award in 2016. He frequently chairs sessions at national and international meetings and also is a frequent reviewer for cancer and imaging journals. He has been a grant reviewer for NIH, the Italian Ministry of Health, and the French “PRESTIGE” program. Dr. Liu served on Annual Meeting Program Committees of the International Society for Magnetic Resonance in Medicine (ISMRM) from 2014-2017.

Dr. Guanshu Liu has been primarily working on developing new MR molecular imaging probes and technologies and exploring their applications in disease diagnosis and treatment monitoring. He has a broad interest in biomedical imaging, nanomedicine and chemistry. Currently, his researches focus on 1) Precision imaging of cancer and other diseases; 2) Theranostics for cancer and other diseases; 3) Multifunctional nanoparticles & biomaterials; and 4) imaging guidance for regenerative medicine.

For a list of Guanshu Liu's most recent publications searched from the NIH's PubMed Database, please use this Search Link.