Nick, who was diagnosed with autism as a child, had always been an easy-going kid, says his mom, Tracey. But all that changed just before Nick turned 14, when he started hitting his face—more than 1,000 times a day—and slamming it on glass doors.

“He was scary to be around,” Tracey says. “I had to separate the kids.” Nick’s teachers had to restrain him eight or nine times a day.

One day, the behavior analyst at Nick’s school suggested Nick’s parents look into admitting Nick as an inpatient at Kennedy Krieger Institute. That suggestion led to Nick’s treatment at the Institute’s 16-bed neurobehavioral program, one of the few medical facilities in the country equipped to treat children with severe behavioral disorders.

Nick’s stay at Kennedy Krieger turned his life around. The neurobehavioral program’s round-the-clock interdisciplinary approach—in which psychiatrists, social workers, educators, speech pathologists and behavioral therapists all work together to provide individualized treatment to each patient—helped Nick learn to cope with life without being violent.

As Tracey says, “They figured him out.”

By the time Nick went home, he was his old self again, and Tracey was “on cloud nine.” What Kennedy Krieger did for Nick wasn’t “just about [helping him] right now,” Tracey says. It was about helping him for “tomorrow and the next day, and I know that, whatever [comes up now], we can manage.” 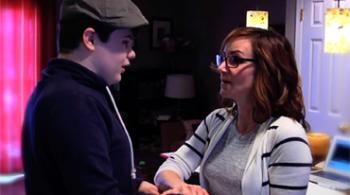 December 2019: A New Chapter for Nick