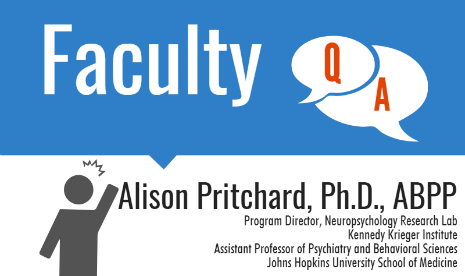 Lisa Carey, senior education consultant at CILSE, talks to Dr. Alison Pritchard, the Program Director of the Neuropsychology Research Lab at Kennedy Krieger Institute, to learn more about how to apply neuroscience research to education.

LC:  To start us off, I want to talk about the different kinds of neuroscience research out there, because it’s my understanding that not all of it can be applied to education.

AP: Yes, there are lots of different kinds of neuroscience research out there, but before we dive into that, I want to point out that there is also great education research available.  You have neuroscience research that might have educational implications, but then you also have education research that may not talk about brain-behavior relationships specifically, but still has a lot to offer teachers in terms of what works in learning.  I just want to make sure that we aren’t forgetting about a large area of research simply because the word neuroscience sounds cool.

I think it’s great to know about neuroscience research as it applies to education, and there are definitely areas in which neuroscience research can supply important information. There is also a heck of a lot of good educational research about what does and doesn’t work in the classroom.  That information is equally, if not more, valuable in some cases, because it doesn’t require a translational leap.

LC: That brings up an interesting point that Legrenzi and Umilta make in their book Neuromania: On the Limits of Brain Science.  They point out that neuroscience is very appealing to the general public and describe instances in which people were more likely to believe something if an image of a brain was present. I think you make a good point in that brain research isn’t necessarily better than education research, but that the two areas can inform one another.

AP: Now that I’ve done a plug for education research, let’s get back to your original question.

AP: To start, there is a good deal of neuroscience research that is done with animals.  That type of bench science, while very important, is not necessarily generalizable to humans.  For example, there could be a really cool study about the effects of some kind of medication on cognitive function in mice.  Maybe some particular medication made mice two hundred times smarter, but that’s not necessarily generalizable to humans.  That medication may not work the same way in the human brain; but also, it may not mean quite the same thing when we say smarter in the mouse brain verses the human brain.  How are we going to test that something made mice smarter?  Probably run the mice through mazes.  But, with humans, visual/spatial learning is just one small part of what we currently conceptualize as intelligence.  Animal models are really important in that they can inform us about the safety or  preliminary efficacy of particular drugs or techniques, but generalizing the results of one or a couple of animal studies to humans doesn’t make sense.

LC: One of the questions I always have when I hear about new brain research is whether the study used humans or animals. Sometimes it’s hard to tell.  The science reporting in mass media isn’t great at emphasizing the difference.  I’m assuming that you can’t really generalize research done at the cellular level to the classroom.

LC: What about imaging studies? I’ve read some really weird articles for teachers that talk about brains “lighting up like Christmas trees” while in the scanner.

AP:  Yeah, nothing is actually lighting up in your brain, that’s a phrase used to describe the highlighting of the images that helps us interpret the scans.  To start off, there are two types of imaging research.  There is structural, which uses MRI to look at the size and formation of anatomical structures of the brain and there is functional, which uses fMRI to look at the brain in action.

For example, a recent study of preschoolers scanned 13 children who have ADHD and 13 who don’t. The researchers then compared the two groups and found that, on average, preschoolers with ADHD had significantly smaller caudate nuclei than preschoolers without ADHD (Mahone et al., 2011).That information, on its own, isn’t super helpful to teachers, even though it moves neuroscience in the direction of better understanding ADHD and neurodevelopment.

With functional neuroimaging you are looking at the brain in action.  This type of research might be a little less of a translational leap for teachers because the fMRI is going to show how the brain works in response to some particular stimulus. For instance, Suskauer and colleagues (2008) scanned 25 children with ADHD and 25 children without ADHD using functional MRI. The children were asked to complete a reaction time task while in the scanner, so the scans indicate which areas of the brain are more vs. less activated over the course of the task. They found differences between the groups in terms of the association between brain activation and performance on the task.

LC: Ok, so imaging studies may offer more direct value to teachers than animal or cellular studies.  What other types of neuroscience research are out there?

AP: There is also neuropsychological research (performance-based neuroscience research), which is often done in concert with imaging.  So, let’s say we want to look at the relationship between structural characteristics of a child’s brain and how that child performs on certain academic tasks.  We would use lab-based measures that mimic the types of tasks that a child might have to do at school, and compare performance on these measures to imaging findings..

LC: That sounds a bit more promising for educational applications.

AP: It is, but it can still be a pretty big leap to go from structural or functional neuroimaging research, and even neuropsychological research, to saying what needs to happen in the classroom.  The ecological validity, the extent to which the conditions of the study match the conditions of the classroom, is often pretty low.  When ecological validity is low, that means that the study findings can’t really be generalized very effectively to other (non-study) settings. That’s not to say that neuroscience shouldn’t or can’t inform education, but that it should be done cautiously.

LC: In Horvarth and Donoghue’s paper they talk about that problem of translation and say the way to translate research into the classroom is going to have to be through neuropsychology.  Neuropsychology is the avenue that makes neuroscience research usable in education.

AP: Well, at the risk of sounding self-serving, I would tend to agree.  I think that neuropsychological research is closer than animal or neuroimaging research to being translational in that way. Still, though, the problem that you have with applying even neuropsychological research in the classroom is one that you mentioned in an earlier blog post.  You have such diversity among the learners within a classroom, and the vast majority of neuroscience research is quantitative and is therefore an examination of averages.  So, if we scan or test fifty people, we want to know if on average the results are different in the experimental verses the control group. This approach puts less emphasis on the variability between individuals, which can be considerable. So while we can say, on average this is true about differences in the brain or in performance between these two groups, and that will apply to many students in a given classroom, it certainly won’t be the case for all of them. This type of research isn’t very good at telling you, with certainty, what is going to work for a specific child.

LC: So it goes back to not being able to be prescriptive about research that is done with averages.

AP: Yes, you’d want to be cautious about telling teachers that something is going to work for every child. Going back to educational research being important, we can also point out the value of qualitative research or single subject design research in circling back and looking at educational practices from different, more specific perspectives.

LC: That’s a good point, there are a lot of ways of looking at what practices are successful in education.  This makes me think that this might be a place where action research can be valuable.  For example, I might say, here is what a few neuroscience studies showed about sustained attention in middle-schooled aged kids, let me test different lengths of direct instruction in my classroom and collect data to see what works for my students.  I can collect data and make decisions along the way to ensure that my instructional practices are matching the needs of my individual students.

AP: Yes, that would be a helpful approach because you have so much variability in a classroom.

LC: One of the concepts behind the UDL framework is that while we can’t easily be prescriptive because of the variability in the population, we can use neuroscience to help predict where the variability will occur and then plan for that.  Let’s say that kid’s ability to plan, to self-regulate, to use inhibitory control and working memory, that those thing are going to be variable, because we know from neuroscience that things like executive function are variable among kids even if they’re the same age.  Likewise you can say, we’re probably going to need to demonstrate knowledge in multiple ways because people’s sensory input abilities are variable.  We see to different degrees, we hear to different degrees, and we have different preferences.  And then we are all affectively different.  I might be more anxious than you and we might find different things engaging.  It takes what we know about brains and neurodevelopment and then rather than saying what to do, it says here are considerations you need to have about variability within your classroom.  Which to me, has always seemed like the most appropriate way to use the information that we have – at least so far.

AP: I agree with that. In neuroscience and neuropsychological research we’re getting to the point where we are starting to understand the underlying causes of “what’s wrong,” but in many ways we still don’t have a great understanding and haven’t investigated the different ways to fix that.  We may know that there are structural or functional differences in the brains of children with and without ADHD, but we really have not figured out what to do about those differences to improve the lives of children with disabilities.  We’re doing better in that, but we’re still just starting out.