Megan Silcott, an athletic and outgoing 16-year-old, was about to start her junior year of high school in August 2012. She was looking forward to getting her driver’s license, prom, graduation, and a future in fashion or acting. But Megan’s dreams were suddenly put on hold one frightening morning when she woke up to find herself paralyzed from the shoulders down. 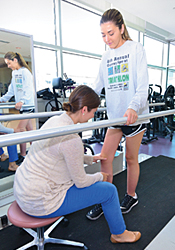 Megan had been out with friends the previous night but returned home because she was not feeling well. It turned out she was suffering from acute disseminated encephalomyelitis (ADEM), an extremely rare condition characterized by a brief but widespread attack of inflammation in the brain and spinal cord that damages myelin, the protective covering of nerve fibers. Megan was rushed to the hospital and put into a medically-induced coma to prevent further brain damage. Then she was brought to the International Center for Spinal Cord Injury at Kennedy Krieger Institute, where she remained for three and a half months.

There were different opinions of Megan’s prognosis, says her mother, Jen Silcott. “Some doctors said she would never recover, that she would probably never walk again. Then there was the other side, which we chose to stick with, that said she would recover, but it was going to take time and therapy.” 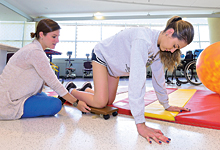 Megan dove into therapy with determination. Within six months, she had regained mobility, strength, and control in her upper body and her core, and was walking with a walker. At one point, she could walk short distances without any assistance at all. Then she had a serious setback.

Her mother believes this was due to a combination of factors. Megan had gone back to school and cut back on her intensive therapy regimen, and the weather got colder. By January 2014, Megan was noticeably weaker and dependent on a wheelchair. So her family made the decision to bump up her therapy again and have her tutored at home.

When Lizzie Neighbors, a physical therapist at Kennedy Krieger, began working with Megan last October, the teen’s strength—and spirits—were very low. “Like you could expect, she was very disheartened. She had worked so hard to get where she was before, and having this setback without a known cause was a hard thing for her to grasp,” says Neighbors.

Megan also met another person at Kennedy Krieger who would play a big role in her recovery—Patrick Rummerfield. A patient liaison who has been described as “the world’s most fully functioning quadriplegic,” Rummerfield has competed in triathlons despite sustaining a spinal cord injury in a car accident decades ago. “He took an interest in Megan and really gave her this hope that, look, something crummy happened to you, but how are you going to use this to your advantage?” says her mother. 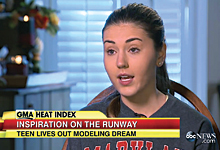 Rummerfield had a friend, F. Scott French, who works for The Art Institute in New York. A couple of phone calls later, and Megan was walking the runway as a model at New York Fashion Week in February. She agreed without a moment’s hesitation, and wasn’t fazed at all by the ensuing flood of publicity from the Huffington Post, Fox News, and Good Morning America, among other outlets.

“I just figured if the opportunity opened up for me, I might as well take it,” says Megan, who walked down the runway on her own with a walker, and later in a wheelchair pushed by designer Nina Perdomo. “It was crazy. It was so fun. I met a lot of nice people. It was all around a good experience.” 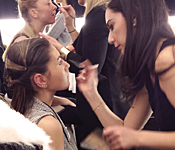 While Megan was not nervous at all, her mother certainly was. “I was freaking out,” says Jen with a laugh. “But I think it was so good for her in all aspects—mentally, physically… I don’t think it really ever frightened her.” The outpouring of love and support for Megan and her family was huge. A GoFundMe page set up by a friend has raised $14,000 for a special therapy bike for Megan that is not covered by insurance.

While Megan’s continuing recovery shocked the fashion world and most others who have heard her story, it comes as no surprise to those who work with her at Kennedy Krieger. “There’s always hope for recovery,” says Neighbors. Getting Megan back on her feet and even back to where she was before her injury is “her goal and that’s my goal, and we’re always working toward it.” 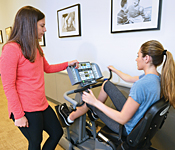 But even more important is the staff’s unwavering dedication to instilling patients with the hope and drive to work toward recovery, day after day. “It’s always tough when you’re put in a situation like this, but you’ve got to keep moving forward in order to get where you want to go. It’s not going to come to you,” says Megan, who wants to attend acting school and move to California one day. “So that’s why I just continue to work for it. That, and I want to keep myself in shape!”