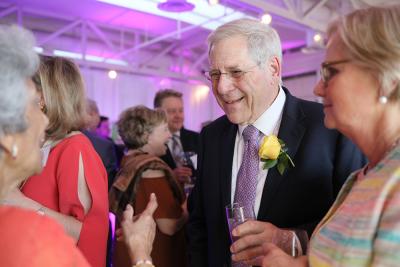 Nancy S. Grasmick, EdD, chair of the Kennedy Krieger Institute Board of Directors, kicked off the reception with a warm welcome, thanking the more than 150 family members, close friends and colleagues of Dr. Goldstein present for attending and celebrating Dr. Goldstein’s  three decades of guiding the Institute with visionary leadership and steadfast commitment to its children and families. 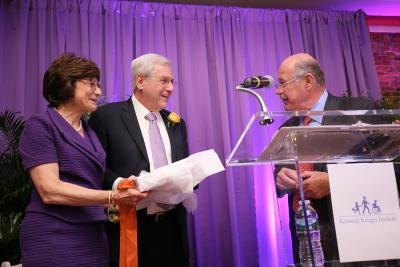 “Dr. Gary W. Goldstein, [on behalf of] those in the room who had the pleasure of being on your team, and [on behalf of] thousands more who worked with you or were cared for by your staff, thank you!” Miller said. “We are all better people for being part of your team.”

Dr. Guy McKhann—Dr. Goldstein’s mentor and close friend, and a professor of neurology and neuroscience at The Johns Hopkins University—also offered remarks, telling of how, nearly 50 years ago, he first recruited Dr. Goldstein as his resident fellow at Stanford University, and then of how, subsequently, he helped bring Dr. Goldstein and his family from Ann Arbor, Michigan, to Baltimore to work at Kennedy Krieger. 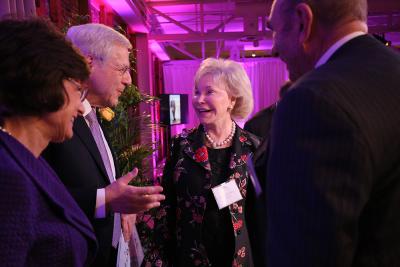 Advancing research, innovation and discovery has been one of Dr. Goldstein’s most intense passions throughout his 30 years at Kennedy Krieger. Several years ago, Dr. Goldstein helped launch an annual Innovation Grant to advance research that might lead to transformative discoveries in neurological and developmental disorders. Grant winners are selected from among Kennedy Krieger researchers through a highly competitive process and receive an award of as much as $100,000 over two years.

The evening concluded with a toast to Dr. Goldstein by Dr. Grasmick. “Tonight, we’ve come together to celebrate a wonderful man who, for 30 years, has written the book on visionary leadership here at Kennedy Krieger Institute. As we say thank you for a job so very well done, our wish for you, Gary Goldstein, is that the next chapter in your life be just as rewarding and successful, … filled with friends and family, happiness and good health.”