Beginning in the late 1980s, the Institute began to vastly expand its research and clinical agenda. The mission of the Institute broadened to encompass helping children and adolescents not only with developmental disorders, but all brain disorders, achieve their potential.

The Institute's mission stayed true to the initial vision of Winthrop Phelps and other pioneers from 50 years earlier, but it also expanded to reflect evolving scientific understanding of diseases and disorders of cognition, movement, and development, and new treatment options.

In 1990, the Institute launched a major $25 million capital campaign that exceeded its goal by $2 million when the campaign ended in 1994. Midway through that campaign, a significant leadership gift from community leader and philanthropist Zanvyl Krieger was recognized with the Institute's formal name change to the Kennedy Krieger Institute, now an internationally recognized name.

That same year, the Institute opened its Fairmount middle school, incorporating programs for children with brain injuries and autism into the curriculum. Later, the high school facility opened on the Institute's Greenspring Campus as a result of another successful capital campaign. The Kennedy Krieger School was honored as a Blue Ribbon School of Excellence in 1997, one of the highest academic honors in the nation. 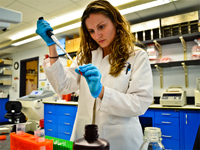 During this time, the Institute's research programs also rapidly expanded, with NIH grant funding exceeding $9 million by the middle of the 1990s. The opening of the F.M. Kirby Research Center for Functional Brain Imaging in May 1999 gave the Institute's researchers powerful new tools to explore the growth and development of the brain.

The Institute's continued expansion led to another $50 million capital campaign in 1998. That campaign raised $54 million by 2001, thanks to the support and loyalty of donors, foundations, and other generous organizations and corporations. As a result, the first decade of the 21st century witnessed substantial growth in the Institute’s facilities.

Through its largest fundraising effort to-date, the Unlocking Potential campaign, the Institute inaugurated some of its largest and most influential programs and centers. The opening of the International Center for Spinal Cord Injury in 2004, the launch of the Interactive Autism Network in 2005, and the naming of the Hugo W. Moser Research Institute at Kennedy Krieger in 2007 brought additional recognition to the Institute during this time.

The Center for Genetic Muscle Disorders at Kennedy Krieger Institute was founded in 2009, leading to a broadening of the Institute's mission statement to include children and adolescents with musculoskeletal disorders. The growth continued in 2011 with the expansion of the Institute's internationally renowned Neurobehavioral Unit, attracting patients with severe behavioral disorders from around the world. The Institute also reached out to military families through its behavioral psychology program and the Family Center's newly established Eagle Project, both targeting the behavioral health needs of families stressed by deployment and other unique aspects of military life. 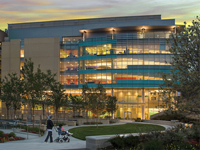 With its 75th anniversary in 2012, the Institute has grown far beyond its small, but ambitious beginning as a private residence turned hospital/school. Today the Institute is renowned for its state-of-the-art research initiatives, innovative patient care, education, and community programs throughout the Baltimore-Washington metropolitan area. The Institute continues to further its mission by training hundreds of professionals each year who go on to assume leadership positions in the developmental disabilities field throughout the world.

Still, the heart of the Institute remains its fundamental commitment to helping children and adolescents with disorders of the brain, spinal cord and musculoskeletal system achieve their potential and participate as fully as possible in family, school, and community life, while striving to excel in providing safe and effective care of the highest quality. This mission continues to guide the Institute’s administration and staff as they meet the challenges and opportunities of the future.