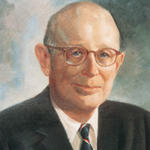 When the Children's Rehabilitation Institute opened in 1937, the idea of providing interdisciplinary care that combined medical services with physical therapy and education for children with special needs was ahead of its time.

During his time as a fellow in orthopaedics at Harvard Medical School and chairman of the orthopaedic faculty at Yale, the Institute's founder, Winthrop Phelps, M.D., recognized that simply helping children with developmental disabilities adapt to their environment was not enough. From the start, Dr. Phelps and his colleagues sought to transform that environment by developing new treatments and therapies and new approaches to integrating children with special needs into the community.

In the summer of 1937, Dr. Phelps rented a large home on Reisterstown Road in rural Baltimore County to house the Institute, paying the first three months rent out of his own pocket. The Institute officially opened on October 1, 1937, with a small staff of teachers, physical and occupational therapists, a dietician, and a billy goat that served as its mascot. 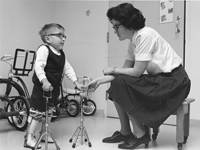 A medical board composed of specialists in orthopedics, pediatrics, neurology, ophthalmology, otolaryngology, dentistry, physical medicine, and psychiatry worked closely with the staff to provide care for the children. Once a week, the entire staff met to discuss the progress of each child and tailor approaches to meet their needs.

The Institute was also a place where physicians, therapists, and researchers interested in helping special needs populations could come to train and conduct research. By 1938, the Institute had started training professionals in the field of cerebral palsy and occupational therapy. During this time, Dr. Phelps conducted research and published studies, traveling around the country to lecture in clinics and medical societies, sharing his methods and results.

This innovative model of care spread rapidly throughout the United States, giving rise to hundreds of similar institutions by the mid-1950s, many of which were staffed by physicians and therapists who had trained with Dr. Phelps and his team.

In response to the growing demands of patients and families, the number of full-time staff and trainees continued to expand -- first at a large private residence called Pleasant Hill in Baltimore County and later at the Mt. Pleasant location on the outskirts of Reisterstown, MD which it occupied until the mid-1960s. During that time, the Institute established an affiliation with the Johns Hopkins School of Medicine and began searching for a location near the school's East Baltimore campus.

From the beginning, the Institute's founders understood that by bringing together the disciplines of medicine, therapy, and education, they could profoundly change the lives of children with complex disorders and injuries. At a time when there were few proven treatment options, the concept of providing individualized care and education -- all in the same setting -- was groundbreaking.

It's a mindset that continues so many years later, only amplified.