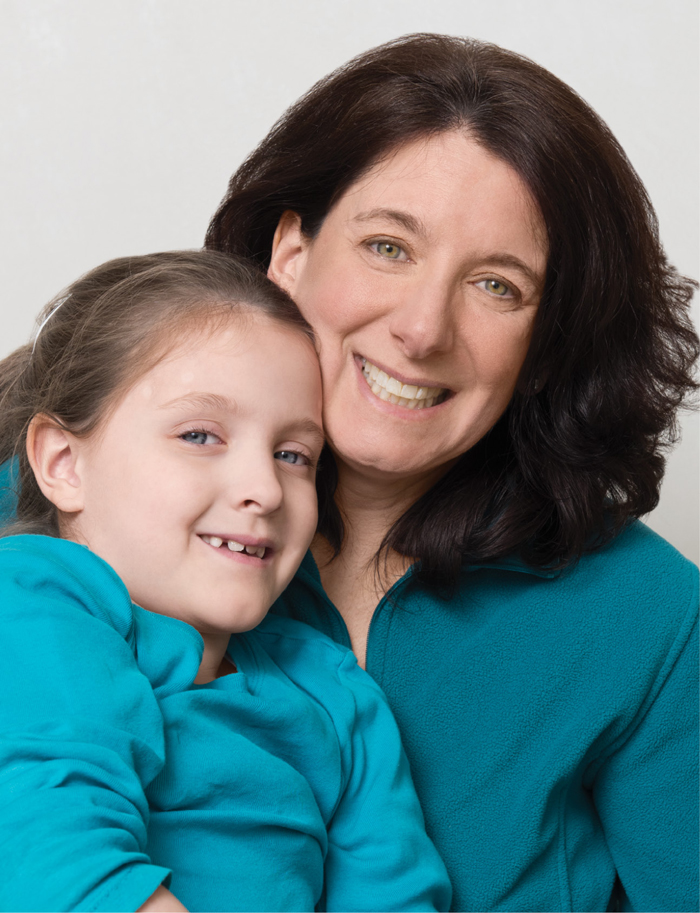 “Ahhh!” Caetlyn, 7, shrieks with glee, shielding herself with her arms from the colorful suction-cup toys Meyer is tossing above her head. Caetlyn grabs the “squids” and sticks them on the tray of the stander that’s supporting her body in an upright position.

“Does this go here?” Meyer asks, touching a “squid” to Caetlyn’s nose.

Caetlyn giggles. “Noooo! It goes right here,” Caetlyn corrects her, sticking the toy to her tray. Everyone around them in the rehabilitation gym of Kennedy Krieger Institute’s International Center for Spinal Cord Injury laughs at the silliness of it all— and because it’s good to see Caetlyn doing so well.

Caetlyn always loves going to physical and occupational therapy at Kennedy Krieger. “Her therapists are hilarious, and make it really fun,” says her mom, Caryn. “She bounces out of therapy listing the games she won and showing me the pictures she painted. To her, therapy is something fun. For me, it’s more like a workout.” 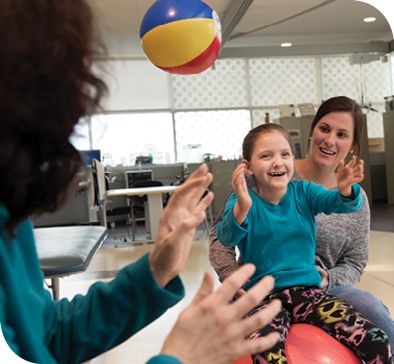 As Caetlyn defends herself from the pseudo-squid, physical therapists help Caryn into an adult-size stander that’s just like Caetlyn’s, only bigger. Caetlyn and Caryn were injured in a car accident in November 2015—Caetlyn, then 3, with a spinal cord injury in her neck and injuries to her lungs and spleen, and Caryn with a spinal cord injury in her chest, broken ribs and a broken wrist.

Countless hours of physical and occupational therapies have allowed Caetlyn and Caryn to be able to use wheelchairs efficiently. Caetlyn still needs a back brace to help her sit up, and her hands aren’t quite fully functional yet, but playing with the squid-like toys—grabbing, throwing, catching and sticking them—is helping get the nerves and muscles of her hands and fingers going again.

It’s part of Caetlyn’s program of activity-based restorative therapy, in which the spinal cord injury center specializes, and it’s loads of fun. Caryn’s therapy may be less silly, but she can’t help smiling while her daughter’s clearly enjoying herself.

At Caetlyn's age, having fun in therapy is important, because that will get her to keep going back and improving.”
– Caryn

A Board Game With Mom

After the accident, Caetlyn and Caryn were in separate hospitals, in different cities. Both needed surgery. Caryn’s mom stayed with Caetlyn the whole time, traveling with her on a chartered medical flight to Kennedy Krieger.

Caetlyn stayed in the Institute’s inpatient rehabilitation hospital for six months, her head bolted into a halo-shaped brace for the first four months so the vertebrae in her neck would heal. Caryn stayed in a skilled nursing facility for three months, then at a rehabilitation facility specializing in treating spinal cord injuries for another two months. After that, Caryn visited Caetlyn regularly at Kennedy Krieger. 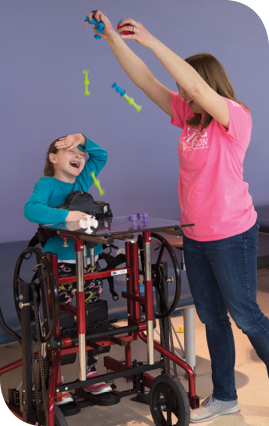 Seeing Caetlyn in the halo gave Caryn a shock. “My once feisty little girl, who could run around, dance and sing, and do puzzles and color with her hands, now could do none of those things,” she says. When Caryn was finally strong enough to hold Caetlyn on her lap, “I just hugged her and sobbed. It had been so long since I’d held her like that.”

While the halo was on, Caetlyn’s therapists worked on her arms and hands, waking up the nerves through simple exercises. Once rid of the halo, Caetlyn began strengthening her trunk and relearning how to roll over. Supported by bolsters, she sat up for longer and longer periods of time, drawing and playing games while developing core strength and balance.

Child life specialists helped Caetlyn learn about her injury and understand the treatments she was receiving. With dolls and stuffed animals, they acted out the procedures she underwent. Specialists in behavioral psychology helped her process what had happened. 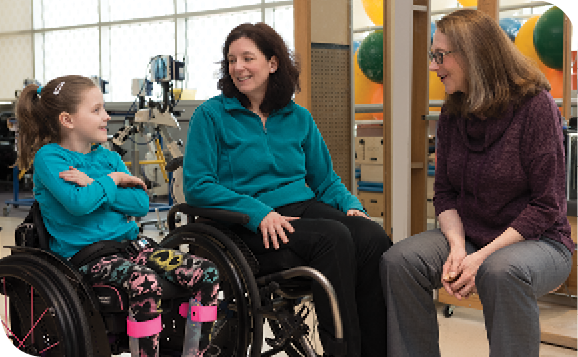 One of Caetlyn’s biggest hurdles was relearning how to eat— not uncommon for someone with a spinal cord injury like Caetlyn’s, explains Janet Dean, pediatric nurse practitioner for the spinal cord injury center. Initially, Caetlyn needed a gastric feeding tube. But after two years of working to redevelop her ability to bite, chew and swallow—first with the Institute’s feeding therapists during her stay at Kennedy Krieger, and then at home—the tube came out. Now she has a healthy appetite, Caryn says.

The summer after the accident, Caetlyn and Caryn began outpatient physical and occupational therapies at Kennedy Krieger. At one of their earliest sessions, Caetlyn choose a board game for the two to play together. While they played, Caetlyn— with Meyer’s help—sat on a large therapy ball.

“From a therapy standpoint, we were focusing on Caetlyn’s balance, but for Caetlyn, it was ‘I get to play a game with Mom now,’” Meyer says.

For the past three years, Caetlyn and Caryn have each put in two to three hours of therapy a day, at home or at Kennedy Krieger. Going through the experience together, Caryn says, has strengthened their mother-daughter relationship.

“We’ve both come a long way,” Caryn says. “I’m amazed at how much energy she has now, even after being at school all day!” 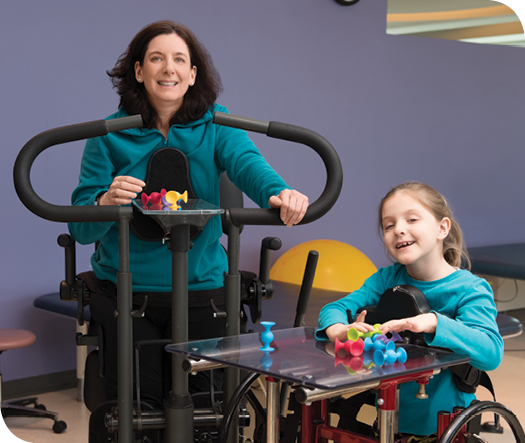 For Caryn, rehabilitation is about getting her life back as a working mom of two daughters, and being able to care for them as independently as possible. Caetlyn, meanwhile, is conquering the milestones of childhood while rehabilitating her body. “For kids, rehabilitation isn’t a static thing—we’re not trying to return Caetlyn to a certain state,” Dean explains. “One of our jobs is to help her move along and meet the milestones her peers are meeting.”

Caryn now works part-time and is relearning how to drive. Caetlyn loves playing with toys and making up stories. “When we both have downtime, usually on the weekends,” Caryn says, “we play two, three, sometimes four different board games together.”

Caryn remains hopeful they’ll walk again someday—maybe with braces, or with some other technology yet to be developed. Already, they’ve regained a lot of mobility. “I think in about five years, I’ll be able to take care of Caetlyn much more than I’m doing now,” Caryn says.

As for Caetlyn, “she will finish high school, go to college, get a job and be a productive member of society,” Caryn says, “Perhaps she’ll become a lawyer—she’s so very smart!”

In the meantime, Caryn soaks up as much time as she can with Caetlyn. When they sit together, side by side or with Caetlyn in Caryn’s lap, no wheelchairs or halo in the way, Caryn’s no longer crying—she’s smiling. So is Caetlyn. “I treasure those moments,” Caryn says.

Watch Caryn discuss how going to therapy with Caetlyn has made their relationship even better: