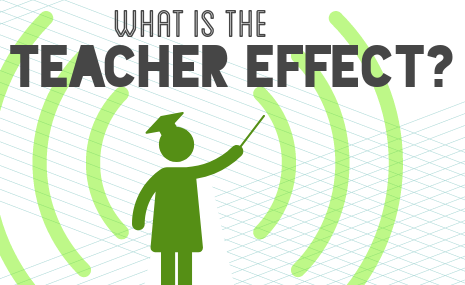 The goal of this blog has always been to link educators to research in a quick and easy-to-digest format.  While we’ve covered topics from brain development to evidence-based practices, one important topic we haven’t covered is you! As a teacher, you are one of the most important variables in a student’s achievement. But, rather than just sing your praises, let’s discuss what the research actually tells us about the effect of teachers on student achievement.  To accomplish this, we are going to take some deep dives into some well-respected studies and break down the findings for you.

Maybe you’ve heard the term teacher effect in education classes, on the news or during an in-service training.  The teacher effect is the measurable difference a particular teacher has on the outcomes of his or her students in a given school year.  The term gets a lot of buzz because many studies have demonstrated that differences in student outcomes is more significant between individual teachers than among schools, leading many to question how we train, recruit, retain, motivate and even reward strong teachers.  But, as many educators realize, it is very difficult to conceptualize and measure just what goes into high quality teaching.

One widely cited study, “How Large are Teacher Effects” by Nye, Konstantopoulus, and Hedges (2004), examined the teacher effect using longitudinal data and randomized class assignment to disscover the impact individual teachers have on student growth and achievement.

If your researcher knowledge is a bit rusty, a longitudinal study means that the student participants were followed over the course of several school years. Randomization means that the researchers randomly assigned students to classes rather than allowing the schools to cluster students based on variables such as ability. This practice is used to ensure that classes are made of students who are statistically equivalent.

Using multiple school sites, the researchers pooled data and used statistics to control for variables such as socio-economic status (SES), prior student achievement, race, ethnicity, gender and class size.  Why control for all of these variables? Because any one of them might be an alternative explanation for why some students achieved more than others.  This is why studies involving the measurement of education are so difficult - many factors can contribute to student outcomes!  Additionally, defining and measuring every variable that might matter to student achievement is not always possible.

In the world of research, there is a concept called confirmation bias, which is a way of explaining that we tend to agree with findings that confirm our own experiences and reject those that do not conform to our pre-conceived ideas.

As a former teacher and a current instructional coach, I assumed class size would have a more significant or similar role in student outcomes than differences in the teacher.  After all, I had found it easier to develop relationships with students, offer more personalized connects to content, and ask and answer questions when there were fewer students in my room or when teacher-student rations were reduced through co-teaching.

The researchers, however, found that differences between student outcomes were more significantly correlated to teacher differences than class size. These findings caused some cognitive dissonance: my experience told me that teachers would most likely have an easier time being effective if they had fewer students, but the findings suggested that a high-quality teacher would be effective with small and large classes.It is important to note that in this study, class sizes remained under 30 students.

Interestingly, the Gates Foundation invested two billion dollars into creating smaller schools with smaller classes and came to the same conclusion- that teacher quality was a better predictor of student outcomes rather than class size.  (They now have a large project focused on the measurement of effective teaching.)  This finding peeked my interest in what other factors may be at play in teacher-based differences of student achievement.

The researchers set out to determine if the school could be a contributing factor to the variance of teacher effect.  Much like the class size question, this was prompted by policy discussions.  The concept of school choice is predicated on the idea that the school a child attends is a major contributing factor to student outcomes. The researchers, however, found that the variance between teachers was greater than between schools – meaning that differences in student outcomes were more closely correlated to individual teachers rather than schools.

Student socio-economic status (SES) is frequently discussed in education, as multiple studies have indicated  there is a correlation between a family’s wealth and education and a child’s academic outcomes. However, SES is difficult to measure among students because schools don’t typically keep records of parental levels of education, nor do they record exact family income data.  Instead, researchers frequently use free and reduced meals data to indicate how many students are from low income families.  Using this as means of measuring SES isn’t perfect, but when the researchers looked at SES and teacher variance, they found something interesting - the teacher effect was larger for students with low SES.  What’s more, the larger impact of high-quality teacher on low income students was not explained by the school the students attended.   As the authors point out, this is an interesting finding given that one policy approach to improving educational outcomes for low income students is to offer school-choice, but these finding suggest that a focus on teacher quality could be more helpful. Regardless of how policy plays out, it is important for teachers and school leaders to recognize that high quality teachers are impactful in the lives of low income students.

This study has shown us that the teacher a student is assigned might be more important than his class size and school, and that a high-quality teacher has a greater impact on low-income students.  As an educator, I find it very exciting to know that individual teachers are so important to student outcomes.   But, what contributes to a teacher having a larger positive impact on student learning?  If you assumed education and experience, you might be surprised.  Education (measured in this study whether or not a teacher had a master’s degree or higher) and years of experience had a minimal impact. This is not to say that those things don’t matter, but rather, the way in which it was measured did not allow for a robust enough look at subtle differences in formal education, in-service training opportunities and mentorship.  For example, if you are a teacher reading this blog, you are most likely engaging in a lot of self-directed professional development.  It is reasonable to suspect that all of this extra work would contribute to higher quality teaching. However, how frequently teachers engage in things like self-directed study and professional learning communities was not measured by this particular study.

To summarize, this high-quality study found that the teacher effect was more robust than the impact of class size and  school, and had a greater impact on low SES students than on high SES students. This points to the high importance of identifying the factors that contribute to becoming a highly effective teacher. However, the researchers also noted that education and teaching experience had a minimal impact on the teacher effect. This leads us to a very interesting question.  How does one become a high quality teacher? In the next few weeks, the Linking Research to Classrooms Blog will dive a bit deeper into the research on this important topic.