Natalie Shaheen, advocate and teacher of the blind (who also happens to be blind) talked with Dr. Marina Bedny about blindness and brain and mind development. Dr. Bedny directs the Neuroplasticity and Development Lab and is an Assistant Professor in the Department of Psychological and Brain Sciences at the Johns Hopkins University School of Arts and Sciences. 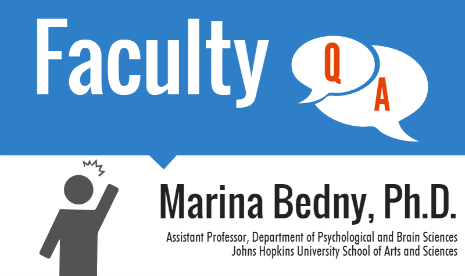 NS: What do you and your lab study?

MB: We are interested in the impact of experience on the development of the mind and brain. I like to call it “neuro-scientific anthropology.” One way that we can study how experience impacts development is to look at the brains and minds of humans who have had different life experiences.

For example, we know something about the difference in experience between someone who grows up with sight and someone who grows up without sight. Blindness is one thing we can study because we know a little bit about vision, and scientists, psychologists and cognitive neuroscientists have a few hypotheses about what vision does for the mind and brain. So we can ask, “How do the mind and brain develop in people who have vision?” “How do they develop in people who don’t have vision?”

NS: What has your research taught you about mind and brain development in the blind?

Insights into brain development come from studies of the visual system in people who are blind. Though it is impossible to estimate, scientists have estimated that one quarter to one fifth of a sighted person’s brain is devoted to visual perception. As primates, we developed a lot of our brain to identify objects and see edges. So, what happens to the brain when it doesn’t get visual information?

A long time ago, people thought the part of the brain responsible for processing visual information would atrophy in blind people. In fact, we’ve known for some time now that blind people use their visual system for things other than vision, but we don’t know exactly what those things are. How similar are the functions of the visual system of a blind person and a sighted person? Is the visual system just designed to process vision, or can it take on other tasks?

What we find is that in blind people, some parts of the visual systems serve functions completely unrelated to vision. In blind individuals, parts of the visual system are involved in sentence processing. These “visual” regions respond to both spoken and written language. Most interestingly, these so called “visual” areas of the brain care about both the meaning of the sentences and the grammar. Basically, from our research, the visual system seems to respond very much like Broca’s area and Wernicke’s area, which are classic language areas of the brain. This is interesting because it suggests an extreme level of flexibility. You are going from vision to language - which is highly abstract and uniquely human.

So, one of the take-homes about blindness is that blind people’s visual systems perform some functions that are not at all related to vision; their visual systems are doing other things that are important to humans, like interpreting language and mathematics.

Studies of blindness also reveal insights about the human mind. How important is vision for learning about the world? One big question we are interested in is, “does the way you learn things shape what you know?” I might learn something from seeing it; you might learn something by touching it. How does the source of knowledge affect the representation that you end up with? We study this by studying concepts using fMRI and behavior in blind and sighted people.

The punch line of that research has been that blind people know everything - all of the same things that sighted people know! The basic concepts you retrieve when you think about these things seem to be very similar between blind and sighted people. One way you could summarize it is that it turns out the brain is not in the eyeballs! I say that because the common belief is often wrong; because vision is so dominant that sighted people think that they know what red is because they see it. But if you think about it, you know a lot about red besides how it looks. You know it's a property, not an object or an action, and you can’t touch it with your hand. Red is more similar to orange than blue, you know all of that. Blind people know all of that, too.

This research suggests that although you can learn material in all sorts of different ways, what you end up with is an abstract representation that doesn’t care where the information came from or how you got it (from your eyes, hands, or ears). You could learn the shape of a cat from touching it, seeing it, or from someone telling you about it, and you will still end up with the same representation.

NS: What can teachers or parents or people who work with blind children glean from what you know about blindness?

MB: I feel like every scientist makes a small contribution to the universe. It is important to not overstate what we know or how that should inform practice. But one thing that we have learned from science is sighted people’s intuition is quite inaccurate about what blind people know. Scientists find that blind people know a lot of surprising things, which sighted people think blind people wouldn't know. So you have to stop and talk to a blind person if you want to know what they know.

I would say that for an educator or a parent it is important not to make an assumption about what a blind child can or cannot learn or what they do or do not know. Science has given every indication that blind children can know all of the same things that sighted children can know. The neuro-scientific and the cognitive evidence suggests that blind kids can achieve exactly the same cognitive and neural mechanisms that a sighted child can, including in fields such as mathematics. The ways in which they are going to learn the material will not always be the same as a sighted child, but the potential to learn is the same.

NS: As a blind student, math was my favorite subject in school and I excelled at it. Can you tell me more about the math research that you have done?

A blind child’s capacity to learn is there - it is only a question of ensuring the learning is accessible to them. Because sighted people are the majority by far, we have had thousands of years of culture, which has been solely aimed at making experiences better for us, the sighted. Our reading system, computer interfaces, cars, and so on are designed to accommodate sighted people. When a blind child comes along, these systems often are not designed for her and as a result there is a communication barrier. But if we design systems and learning activities with blind people in mind, the communication barrier disappears and the blind child can reveal their capacity to learn.

NS: One of the things that I most respect about you, as a researcher, is the way you engage with the blind community to get feedback about your current and future research. Why is engaging with blind people so important to you?

MB: You can’t understand people and how their minds work by treating them like a brain in a jar. If you are working with a population that has a different life experience than you do, you can’t just intuit what things are like for that population -it leads to faulty conclusions. For me and my colleagues, it is more fun to do research when we engage with the community. It helps us stay grounded and do good science.

NS: So, by talking to blind people of all ages, teachers who work with blind children could also better understand the life experience of blind people, which could help to ensure that their teaching practices are grounded in blind people’s realities.

You have a very positive attitude about blindness. How did you develop such a positive conception of a disability that is so often feared and misunderstood?

NS: From your experience, what is one piece of advice you would give to other sighted people about interacting with blind people in a way that is respectful and courteous?