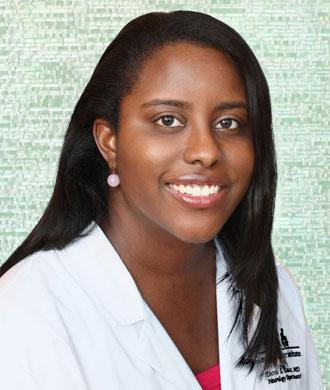 Dr. Eboni Lance is the Associate Director of the Neurology and Neurogenetics Clinic at Kennedy Krieger Institute, neurologist and Medical Director of the Sickle Cell Neurodevelopmental Clinic, and an assistant professor in the Department of Neurology and Pediatrics at the Johns Hopkins School of Medicine.

Dr. Lance received her undergraduate degree from Princeton University and received her medical degree from the Medical University of South Carolina. She did residency in general pediatrics at Childrens Hospital Los Angeles and additional specialized residency training in neurodevelopmental disabilities at the Kennedy Krieger Institute. She received additional research training at Kennedy Krieger Institute/Johns Hopkins University School of Medicine and has a Ph.D. in clinical investigation from the Johns Hopkins Bloomberg School of Public Health. Dr. Lance is board certified in general pediatrics, neurology with a special qualification in child neurology, and neurodevelopmental disabilities.

Dr. Lance’s research interest is in children with sickle cell disease and neurodevelopmental issues, such as ADHD, intellectual disability, and learning disabilities.