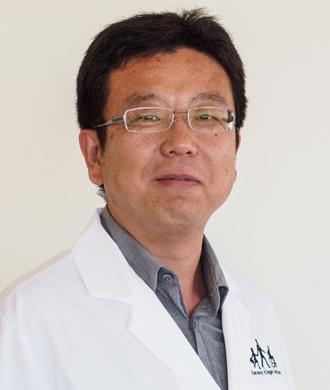 The primary goal of my research is to develop novel Magnetic Resonance (MR) molecular imaging techniques to facilitate the development of modern medicine. As a relatively young but revolutionary discipline, MR molecular imaging aims at expanding traditional MRI from a macroscopic anatomical scale to a cellular and subcellular scale on which specific molecular markers can be specifically visualized, characterized and quantified in correspondence to a disease stage or a treatment response. As such, MR molecular imaging plays a key role in translating those discoveries in basic biomedical researches to clinical practices. My current researches mainly focus on the development and applications of a novel MRI technique, so called Chemical Exchange Saturation Transfer (CEST). We are currently developing a variety of nanoparticle-based CEST imaging probes with low toxicity, high sensitivity and high specificity, and exploring the biomedical applications of these new imaging probes. In addition, we are also interested in exploring the biomedical uses of endogenous CEST contrast. For example, one of ongoing projects in my lab focuses on exploiting the endogenous CEST MRI signal of bacterial organisms for detecting and monitoring bacterial infection in rodent models.