On May 2, Project HEAL (Health, Education, Advocacy, and Law) held a fundraiser at Bertha’s Mussels in Fells Point. More than $2,375 in unrestricted funds were raised for the medical-legal partnership.

On May 17, The Arc Maryland’s 2019 State Convention and Awards Banquet was held at Turf Valley Resort in Ellicott City, Maryland. Ken Capone, Tami Goldsmith and Mat Rice from People On the Go Maryland delivered presentations. Capone and Goldsmith’s presentation was titled, “Speaking for Ourselves: Growing Your Advocacy Skills.” Rice was a panelist in a Developmental Disabilities Coalition Legislative Overview. Jenny Jones, Kennedy Krieger Resource Finder coordinator, disseminated MCDD program information at the event to providers from across the state. Approximately 300 self-advocates, family members and professionals attended the event. 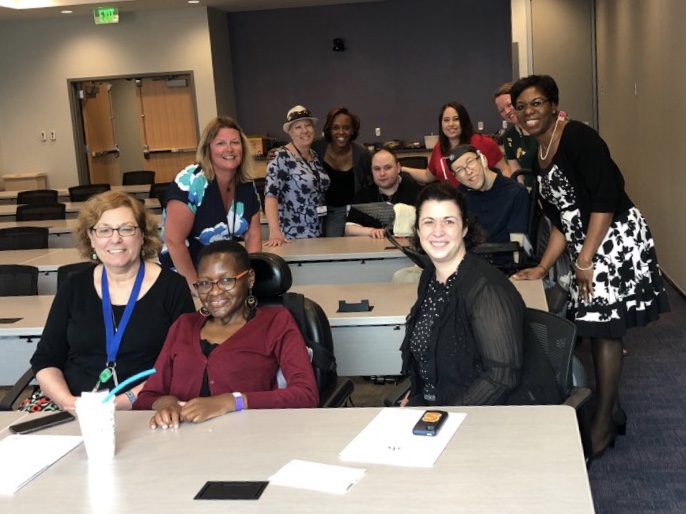 On May 20, MCDD hosted Julie Christensen, director of policy and advocacy at the Association of People Supporting Employment First, and Fridah Monah Truphosah, an Association of University Centers on Disabilities (AUCD) professional fellow from Kenya, Africa. Christensen and Truphosah met with MCDD, People On the Go, Project SEARCH and CORE Foundations staff members, and toured the Institute and Project SEARCH internship sites (pictured, right)

On May 28, Jenny Jones was elected to By Their Side’s board of directors. The agency works with Marylanders with intellectual and developmental disabilities and their families to provide advocacy for health, safety, rights and happiness, and to make sure their wishes are addressed.

On June 4, Jenny Jones represented MCDD at an information table at Towson University’s BRAVE In The Attempt resource fair. The resource fair was held before the third annual BRAVE In The Attempt talks. This year’s theme was “Forward,” with eight self-advocates each giving a brief inspirational talk on events and people that have helped them move forward in their lives.

On July 27, Lee’s Pint & Shell in Baltimore hosted Shuckin’ in the Street, a fundraiser to support Project HEAL. During the event, MCDD members staffed a table offering resources describing Project HEAL’s services and program information. The event raised more than $500.00 for the program.

Center for Dignity in Healthcare for People with Disabilities