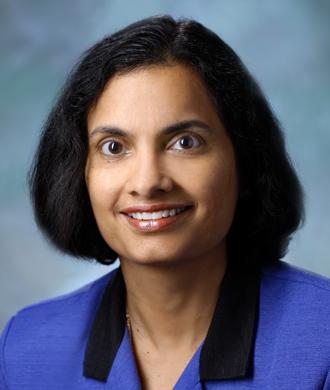 Dr. Menon received her medical training at Madras Medical College in Chennai, India, graduating with the bachelor of medicine/bachelor of science (MBBS) degree in 1991. She subsequently completed pediatric residency training at the Cook County Children's Hospital in Chicago, IL, in 1997 and joined the Kennedy Krieger Institute in 2003 as a resident in neurodevelopmental disabilities through the Johns Hopkins University. Since graduating from the residency program in 2007, she has been an active member of the medical staff at Kennedy Krieger Institute and works in the Center for Autism and Related Disorders (CARD) as the Associate Medical director at CARD.

Dr. Menon's clinical research interests have included metabolic and mitochondrial disorders that are associated with autism spectrum disorders, regression in autism and early identification and treatment of autism and communication disorders.