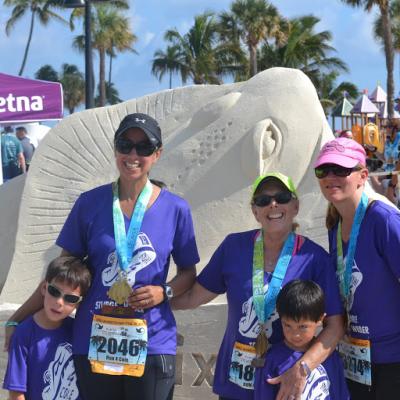 In March of 2012, Bari and Cory’s son Cole was diagnosed with Sturge-Weber Syndrome, a rare vascular condition where a child is born with a port-wine birthmark and is found to also have abnormal blood vessels in their brain and possibly their eye. After receiving the initial diagnosis, Bari and Cory didn’t know where to turn so, like most people, they searched the internet for answers. It was at this point that they first learned about Dr. Anne Comi and her work surrounding Sturge-Weber. According to Bari, they “sent Cole’s records to Dr. Comi to review and Cole’s been a patient of hers ever since.”

In January of 2014, Cole’s grandmother, Cyndy, was struck with inspiration. She was going to run the ING half marathon and use the opportunity to raise funds for Dr. Comi’s Sturge-Weber clinic at Kennedy Krieger Institute. She began the process by contacting Institute staff who informed her that she could create a Fundraise Your Way website. This easy-to-use online tool allowed Cyndy to reach out to her family, friends, and coworkers letting them know that she was going to run a half marathon and asking them to consider pledging a donation for every mile she runs. Less than three weeks later, Cyndy fulfilled both her goals of completing the half marathon and raising funds for Kennedy Krieger.

Other family members were so inspired by Cyndy that the “Run 4 Cole” team has grown to include both mom and dad, aunts and uncles and some friends. Since that first race in 2014, Run 4 Cole has raised more than $21,000 for Sturge-Weber research. Thank you Clark family for everything you do on behalf of Kennedy Krieger!  We are truly grateful for your support.

You too can make a difference in the lives of children seen at Kennedy Krieger by dedicating a race, birthday, wedding, card tournament, or wherever your passion lies! To find out more visit KennedyKrieger.org/FundraiseYourWay.