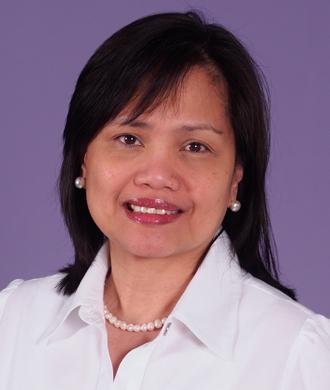 Dr. Bibat is a research scientist in the Kennedy Krieger Institute neurogenetics unit and is also a research associate in pediatrics at the Johns Hopkins University School of Medicine.

Dr. Bibat received her bachelor's of science in psychology and Doctor of Medicine degrees at the University of Santo Tomas in Manila, Philippines. After completing her pediatric residency training at the University of Florida, Sacred Heart Children's Hospital, she became a clinical fellow in neurodevelopmental disabilities at the Kennedy Krieger Institute from 1997 to 2000. She then became a research fellow in the neurogenetics department and subsequently joined the institute as a research associate in March 2001.

Dr. Bibat has devoted her research effort to the understanding of the neurobiological basis of Rett syndrome (RS), a neurodevelopemental disorder predominantly affecting females that is characterized by loss of developmental skills, primarily expressive language and purposeful hand use. It is associated with stereotyped hand movements, gait disturbance, seizures, irregular respiration, and deceleration of head growth. As an active participant of the RS research team, she has been involved in establishing the protocol for the Dextromethorphan (DM) drug trial in RS that is to be started soon. It has been shown that receptors of the excitatory amino acid, glutamate, in particular NMDA are increased in the brain of younger girls with RS.

These alterations in receptor levels are believed to contribute to the onset of seizures, behavioral phenotype, and dementia that sets in by one year of age. Dr. Bibat will study the effects of the use of DM to counteract and block increased NMDA receptor channels, which could become a vital treatment for RS patients. In addition, to further understand the neurobiology of RS, she is involved in the study of Olfactory Receptor Neurons (ORN’s) in girls with RS to correlate severity of the disease with the defects in neurogenesis seen in biopsies. Based on such evaluations, prognosis and therapeutic relevance will be determined.

In her work with other neurodegenerative disorders, particularly those with abnormalities of the white matter of the brain, Dr. Bibat has been studying unclassified leukoencephalopathies. She has helped in the idenfication of new categories of disorders in which genetic studies are being pursued.