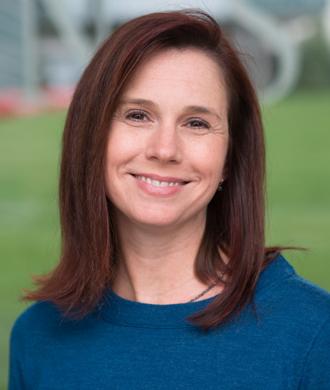 Dr. Amy Bastian is the chief science officer at Kennedy Krieger Institute, a role in which she identifies and promotes new directions for breakthrough research into the developing brain, spinal cord, and musculoskeletal system. She is also director of the Center for Movement Studies that studies the neural control of human movement. Dr. Bastian is a professor of neuroscience and neurology at the Johns Hopkins University School of Medicine.

Dr. Bastian’s research uses computerized movement tracking techniques, non-invasive brain stimulation, novel devices and robotics to control walking and reaching movements. She studies how people with and without neurological damage control movement and learn new patterns. Some of her recent accomplishments include a series of papers on learning new walking patterns using a novel ‘split-belt’ treadmill published in the Journal of Neuroscience, Brain, and Nature Neuroscience. She has coauthored over 100 scientific papers and numerous book chapters and served as chair of the Musculoskeletal Rehabilitation Study Section at the National Institutes of Health (NIH). Dr. Bastian has given many named lectures, including a special lecture at the Society for Neuroscience meeting in 2014. She is currently the primary investigator on two R01 grants from the NIH, one of which recently received a prestigious Javits award from the National Institute of Neurological Disorders and Stroke (NINDS). Dr. Bastian has served on many national neuroscience and rehabilitation committees.