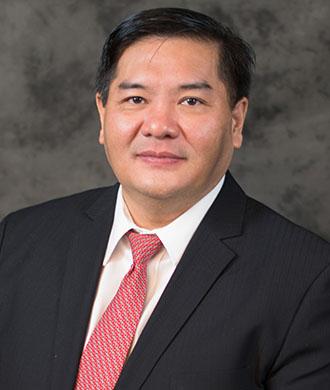 Dr. Albert Recio is a physician in the paralysis restoration program at the International Center for Spinal Cord Injury (ICSCI), and the medical director for the aquatics medicine program at Kennedy Krieger Institute. He is also an assistant professor of physical medicine and rehabilitation at The Johns Hopkins University School of Medicine.

While at the Harvard Medical School/Spaulding Rehabilitation Hospital in Boston, Massachusetts from 2003-2006, he completed his residency in physical medicine and rehabilitation. From there, he completed a year-long clinical fellowship in spinal cord injury medicine at University of Washington/VA-Puget Sound Health Care System in Seattle, Washington in 2007.

Before earning his medical degree, Dr. Recio worked as a licensed physical therapist from 1990-1993 at the Sarah Bush Lincoln Health Center in Mattoon, Illinois. Since 1997, Dr. Albert Recio has been a volunteer physician for medical missions in the Republic of the Philippines. From 2003 to 2006, he was a contributing editor to Harvard Medical School/Spaulding Rehabilitation Hospital’s rehabilitation and review monthly journal.

In 2005 he won the Best Paper Presentation at the third world congress of the International Society of Physical Rehabilitation Medicine (ISPRM) in Sao Paolo, Brazil for his paper titled Post-Stroke Depression: Medication and Rehabilitation. Dr. Albert Recio has been the recipient of the Josefina Laperal Tamayo Award for Excellence, Community Service Award, the Perpetual Help Medical Center Loyalty Award, the Dean’s Gold Medal Award and Academic Scholarship Award. For his 2005 paper titled Fertilized Duck Egg (Balut) and Cholesterol, he won Best Paper Presentation at the Asian Medical Students' Conference in Hong Kong.

Since 2010, Dr. Recio has piloted the Virtual Sailing Simulator Research Program which allows individuals with disabilities to participate in real time “ride on” virtual sailing that has the potential to bridge the gap between dry land and on-the-water adaptive sailing by providing a realistic, safe, and easily supervised medium in which non-sailor patients can easily learn the required skills before venturing on the water.

In 2013, Dr. Recio started researching the long term effects of Transverse Myelitis (TM).  Transverse Myelitis is an inflammatory event within the spinal cord that commonly leads to weakness, numbness, loss of bowel or bladder function and often, paralysis. Alongside the TM advocacy group, and multiple institutions in North America that treat patients with TM, Dr. Recio is collecting real-time data about the outcomes in pediatric TM. At this time, there is limited literature in aiding outcome predictions for the pediatric TM population.