Four-year-old Anthony Olvera was born with a rare genetic disorder called Warburg micro syndrome. Characterized by cognitive, visual, and physical impairment, as well as cerebral palsy, Anthony’s condition meant that his vision was impaired, and he was unable to walk, sit up by himself, or communicate. The family knew the challenges he faced all too well—Anthony’s older brother Giovanni, 15, was born with the same condition.

So when the opportunity arose for early intervention for Anthony, the family wholeheartedly embraced it. At age 2, Anthony was referred for his first admission to the Focused Interdisciplinary Therapy Program (FIT) at Kennedy Krieger Institute.

FIT serves children and adolescents born with chronic disabilities, or those who have long-term effects from an acquired disability such as traumatic brain injury or stroke. The interdisciplinary therapy program gives patients the opportunity for intensive daily rehabilitation, targeting specific therapeutic goals. Patients may work on improving physical abilities, such as sitting, standing, or walking, while others may have a primary goal of improving communication skills through the use of an augmentative device or help with articulation or breath support. Patients also work on activities of daily living, such as handwriting, eating, or dressing.

Patients referred to the FIT program have typically been receiving outpatient therapies on a weekly or monthly basis, but have reached a point where their care team feels that an intensive bout of daily therapy will help them make more dramatic progress. The specific frequency and duration of therapy varies according to the patient’s age, abilities, and goals. However, FIT patients usually receive therapy services three to six hours per day, five days a week, for four to six weeks. 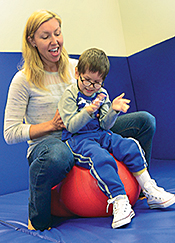 Patient care is provided by a team that includes rehabilitation physicians, physical therapists, occupational therapists, speech-language pathologists, neuropsychologists, nurses, and special educators. This intensive interdisciplinary model of treatment has been growing in use across the country as its benefits are increasingly demonstrated. Research is in the early stages, but is very promising. “We have been using this approach for several years with good success and great response from families,” says Joan Carney, EdD, director of the Fairmount Rehabilitation Programs at Kennedy Krieger.

“Anthony was a good candidate because he was making nice progress with his therapist at home, but they felt he could benefit from a center-based program where he could have access to specialized equipment,” said his occupational therapist, Teressa Garcia Reidy.

Anthony had also just started a half-day program at the Maryland School for the Blind, so the timing of his FIT admission was ideal to assist with his transition to school.

“His improvements during four weeks were really big,” said his mother, Lorena Hernandez, through an interpreter. He learned to sit up by himself and for longer periods. Before, his trunk muscles were very weak and he would lie down most of the day or sit in an umbrella stroller that offered little support. By the end of four weeks, Anthony was sitting upright on the floor playing with toys, and could sit for an hour in an adaptive chair like he would use in a school environment. 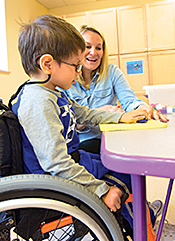 Patients are sometimes recommended for a repeat admission to the FIT program a year or more after their initial admission for a second stint of intensive therapy. Upon his second admission at age 4, Anthony worked to strengthen his arm and trunk muscles so he could propel and steer a wheelchair. By the end of four weeks, he was able to push himself all the way down a hall. His therapists also worked with him on a walking device that is propelled similarly to a wheelchair. Using his arms to propel himself, Anthony could eventually take seven to ten consecutive steps with the device.

He made great strides in his communication, as well. Though Anthony had always been nonverbal, his speech and occupational therapists collaborated to teach him how to use switches to ask for help or request snacks. His therapists and family noticed that he seemed happier and more engaged with the people around him. Even more remarkable was the fact that Anthony, silent during his first admission, began trying to vocalize.

While Anthony will always have difficulty moving, speaking, and following directions, his condition will not worsen over time. The intensive therapy he has received through FIT has given him greater independence. As he grows older and larger, this will help make it easier for his family to care for him. Anthony’s family feels very strongly that he benefited from his two FIT admissions. “He is able to move in his wheelchair now,” says his mother. “My goal for him is to one day walk, but even if that doesn’t happen, I am grateful to Kennedy Krieger that he is more independent now.”

The FIT program is not just for children with multiple impairments. Children with fewer needs have also made great progress, benefiting from experienced therapists of all different disciplines working together, says Garcia Reidy. “When you have patients with so many challenges—vision, motor, cognitive—being able to bring each discipline’s wealth of knowledge to the table to come up with the best strategies is key.”