Making Movies of How the Brain Works

Making Movies of How the Brain Works

What weighs 60 tons, sits in the basement of Kennedy Krieger Institute, has a magnetic field about 140,000 times stronger than that of Earth, and is one of the most important tools for brain research in the country? 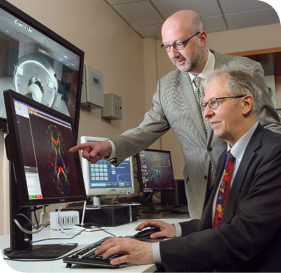 About the size of a minivan, the magnet is part of the 7T fMRI scanner at the Institute’s F.M. Kirby Research Center for Functional Brain Imaging. The “T” is for “Tesla,” a unit used to measure the force of a magnetic field, and “fMRI” stands for “functional magnetic resonance imaging," explains Terri Brawner, the center's chief fMRI technologist.

Founded 20 years ago as a collaboration between Kennedy Krieger and The Johns Hopkins University School of Medicine’s Russell H. Morgan Department of Radiology and Radiological Science, the Kirby Center is dedicated to supporting brain research. Its neuroimaging equipment is used regularly by researchers from across the Institute, The Johns Hopkins University and the University of Maryland, and technologies developed at the center are used by researchers from all over the world, says Dr. Peter van Zijl, the center’s director.

“The center is a major feature of the scientific fabric of Baltimore, and is truly a valuable and integral space for innovation and collaboration that, as far as I am aware, is unparalleled,” says Dr. Bradley L. Schlaggar, president and CEO of Kennedy Krieger. 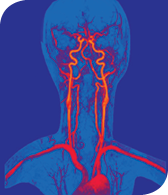 The 7T scanner’s powerful magnetic field allows researchers to make “movies of the brain” by detecting changes in blood oxygenation, explains Dr. James Pekar, the center’s manager and research coordinator. This lets researchers see what areas of the brain are active when a person is, say, reading a book, looking at a photo of a loved one, or at rest. What researchers learn with the scanner can have farreaching implications for developing treatments for individuals with disorders and injuries of the brain.

The center also has two 3T MRI scanners that can also detect blood oxygenation changes. Using the 3T scanners, Kennedy Krieger research scientists Dr. Mary Beth Nebel and Dr. Stewart Mostofsky, director of the Institute’s Center for Neurodevelopmental and Imaging Research, discovered that communication between the regions of the brain controlling vision and movement is reduced in children with autism compared to their typically developing peers, and that this disruption in communication is predictive of how much difficulty they have with socialization and communication. Dr. Nebel and Dr. Mostofsky are now investigating how this discovery can inform new therapies for individuals with autism. 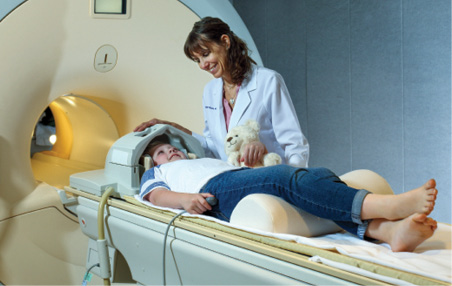 The center’s scanners can also be used to create extremely detailed, three-dimensional scans of the brain. The Kirby Center was the first to develop axonal tracking to map the human brain, and its “MRI Atlas of Human White Matter,” published in 2005, comprises one of the first comprehensive sets of illustrations of connections in the living brain.

“The innovation happening at the center makes it possible for us to understand more deeply the biological mechanisms of both common and rare neurological conditions,” Dr. Schlaggar says. “That deeper knowledge will allow us to advance our diagnostic and therapeutic approaches to treating disorders and injuries of the brain, making the center integral to furthering Kennedy Krieger’s mission.”

Visit the F.M. Kirby Research Center site for more information about brain research being conducted at the Institute.