One Step Closer to a Cure 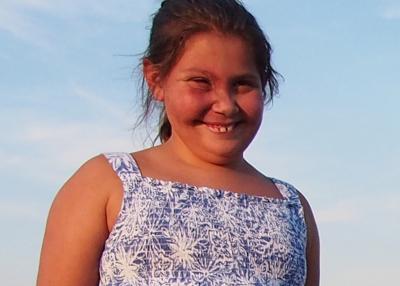 For the Heck family, who have raised over $1 million for Sturge-Weber syndrome research, a medical breakthrough by Kennedy Krieger offers hope for new treatments and possibly a cure in daughter Jenna’s lifetime.

We never thought this moment would happen during Jenna’s childhood. Just hearing this news makes you feel like there is hope; there are ways to improve the quality of life for the next generation.

Ida Heck has been waiting for a medical breakthrough in Sturge-Weber syndrome (SWS) ever since her daughter Jenna was diagnosed with the disorder as an infant nine years ago. But she soon discovered that because the disorder was so rare—only one person in 20,000 has SWS—there was very little research being conducted.

So the Heck family started a fundraiser, Bands on the Bay, to raise money for research. Since 2005, the family has raised more than $1 million for the Hunter Nelson Sturge-Weber Center at Kennedy Krieger Institute, one of the few such centers in the world. And in May 2013, a medical breakthrough finally came. Researchers at Kennedy Krieger announced the groundbreaking discovery of the genetic mutation that causes Sturge-Weber syndrome and port-wine stain birthmarks.

After almost fifteen years of study, Anne Comi, MD, director of the Kennedy Krieger Institute’s Hunter Nelson Sturge-Weber Center, and Jonathan Pevsner, PhD, director of Bioinformatics at the Institute, confirmed their original hypothesis: the syndrome and the birthmark are caused by the same somatic mutation (an alteration in DNA that occurs after conception), now known to be in the GNAQ gene.

The study, published in May 2013 in the New England Journal of Medicine, represents a turning point, Dr. Pevsner says. “We suspected for decades that a somatic mutation was the cause of Sturge-Weber syndrome and port-wine birthmarks, but the technology to test that theory did not exist—until now. The advancements and recently declining costs associated with whole genome sequencing, and the development of next-generation sequencing tools, finally allowed us to test and prove the hypothesis.”

Sturge-Weber syndrome is a neurological and skin disorder associated with a port-wine birthmark and with glaucoma, seizures, cognitive impairment, and weakness on one or both sides of the body.

Jenna, who has a port-wine birthmark on the right side of her face, has had seizures and stroke-like episodes and experiences migraines and cognitive difficulties. She also has glaucoma, which has required multiple surgeries and is treated with daily eye drops.

But her symptoms don’t stop her from playing her favorite sport, soccer, or hanging out with friends. “Jenna is full of energy and doesn’t let her condition get in her way at all,” says Dr. Comi, adding, “She’s taught me a lot.”

For Jenna and her family, the Sturge-Weber discovery brings a sense of hope. “We never thought this moment would happen during Jenna’s childhood,” says Ida. “Just hearing this news makes you feel like there is hope; there are ways to improve the quality of life for the next generation.”

The discovery will not immediately change treatment for Jenna and others with SWS, but it does lead researchers one step closer to a cure. “This is a giant step forward,” says Dr. Comi. “I know the Heck family is very pleased that their support has helped lead to this breakthrough discovery.”

Dr. Comi is now focused on taking the research to the next step. “We have real hope in the next five to 10 years, perhaps sooner, perhaps a little longer, that there will be…new treatments and perhaps even a cure for Sturge-Weber syndrome.”

This is a giant step forward. I know the Heck family is very pleased that their support has helped lead to this breakthrough discovery… It gives great hope for new treatment strategies down the road.