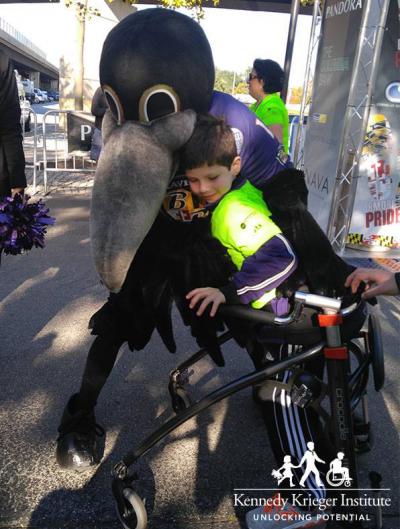 A lionheart can be described as one who is very brave. For young Garrett, the past 15-1/2 months have been a courageously fought journey re-learning to walk, eat and talk after a mysterious illness caused an infection in the brain. Garrett accomplished this all with a positive attitude and a contagious smile.

In July 2015 Garrett was an active first grader who could be found playing outside, most likely with his soccer ball. Then he fell ill with what doctor's believed was strep throat. However, rather than improve he became sicker, eventually falling into a coma. After being treated by the team at Johns Hopkins, Garrett came to Kennedy Krieger's Inpatient Unit. His parents weren't sure if he would awaken and if he did, whether the Garrett they knew would return to them; yet he did. After three months on the Inpatient Unit and eight months in our Specialized Transition Program (STP), Garrett was able to re-learn how to talk, eat solid foods, and walk with the help of his walker. As a result, he was able to return to his beloved bedroom from sleeping on the main level in his family home - a big deal for anyone, let alone an eight year-old little boy. And like many of his peers, he returned to school this past August.

So, when Garrett set a goal to walk across the Baltimore Running Festival Kids Fun Run Finish Line this year, he wanted to able to give back to other children with spinal cord injuries. His entire family rallied behind him to make that happen. Last year his dad pushed him across the Finish Line in his wheelchair as an inpatient. Garrett hoped to show that a positive attitude, hard work and determination go a long way to making anything possible.

Garrett crushed his goal – again! With his familiar smile beaming across his face along with a little help from his favorite sports team mascot - Baltimore Ravens Poe and team cheerleaders – he crossed that Finish Line to cheers, high fives and a huge hug! Goal accomplished! Next up, Garrett has his heart set on meeting his all-time favorite football player, Joe Flacco.