Genes, Environment, and the Causes of Autism: Why solving the methylation mystery is important

Genes, Environment, and the Causes of Autism: Why solving the methylation mystery is important

There are a lot of mysteries about the causes of autism spectrum disorder (ASD), including if, how, and when ASD is inherited from parents. We know, for example, that when one identical twin has ASD, the other twin will generally also have ASD, but not always. How can this happen? Scientists know that part of this mystery has to do with how the environment interacts with our genes.

Everyone has a genetic code in the form of DNA consisting of approximately 20,000 genes. Those genes are the blueprints for proteins or other molecules in our bodies that act through a process called gene expression. The process, however, is not straightforward. How genes are expressed can be affected by the environment through the epigenome. The epigenome is a biological process where genes and the environment interact. The genes you are born with can’t change in your lifetime, but the epigenome can turn on and off some of those genes. The epigenome provides a way for your cells to respond to environmental changes and change gene activity. It has been called the “ghost in our genes”1 because it controls the activity of the genes with which you are born. 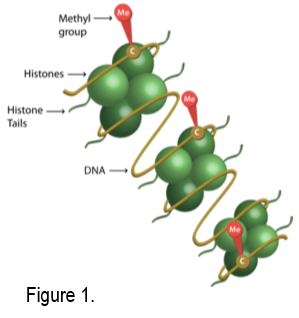 One of the processes that occurs in the epigenome is methyation. Methylation takes place when a methyl group, (a molecule made up of one carbon and three hydrogen atoms), combines with DNA. Adding or subtracting methyl groups to DNA can turn off or on gene activity. In Figure 1, you can see how the methyl group (abbreviated as Me) combines with the DNA (at the cytosine DNA base, abbreviated as C).

Advances in technology allow scientists to measure methylation patterns at millions of locations in a DNA sequence to see how those patterns affect the activity of genes. This allows researchers to better understand how certain genes affect brain function and to identify new genes to study in autism.

The autism community is fortunate to have Autism BrainNet, which provides resources to scientists to help them understand the autism brain, including its methylation patterns. By examining the postmortem brain tissue of individuals who had autism during life and comparing it to the tissue of those who don't, researchers are beginning to understand the differences. Some genes have more methylation and other genes have less methylation.14,15 These differences are prominent in areas of the brain associated with the symptoms of autism -- the prefrontal cortex, the temporal cortex, and the cerebellum. The types of genes that are methylated differently in the cortex are important in mediating cell to cell communication, in regulating the immune response in the brain, and also regulating neurochemical function.16

While great strides have been made, more research is needed to identify potential methylation targets, understand specific gene-environment interactions, and determine whether methylation is a risk factor for autism and/or a consequence of altered brain development.

You can be a part of this research. Learn more about the program or research using this resource by signing up at www.takesbrains.org/signup.

These archived articles were originally published as part of the Interactive Autism Network (IAN) research project. The project is closed and no longer accepting participants.

These archived articles were originally published as part of the Interactive Autism Network (IAN) research project.
The project is closed and no longer accepting participants.

Center for Autism and Related Disorders

<< Back to the Archives