Early assessment and therapeutic interventions for autism spectrum disorder can greatly influence a child’s development. No matter how young, expert assessment and intervention can positively change their life’s trajectory. Listen to Dr. Christine Hess from Kennedy Krieger’s Center for Autism and Related Disorders share Milo’s story of how therapy as an infant made a huge difference in his life.

Jackie Stone: In recognition of Autism Awareness Month, I am joined by Dr. Christine Hess, a developmental psychologist at the Center for Autism at Kennedy Krieger Institute.

Dr. Christine Hess: Milo came to the Center for Autism at 8 months to start therapy because he was showing some early signs of autism. His parents were concerned about his limited eye contact, that he wasn’t making babbling sounds that most babies his age were making, and that he had very few social smiles.

When Milo and his mom started the Infant Achievements Program, he was a quiet baby who didn’t smile often. He had trouble making eye contact when his mom and I were close to him but he seemed interested in watching us when we were across the room. In the program, his mom was taught strategies to help Milo connect with her by playing with different toys and fun activities that we thought he’d like. We used creative ways to get him to look at his mom during playtime and to encourage him to make more sounds to express his excitement. 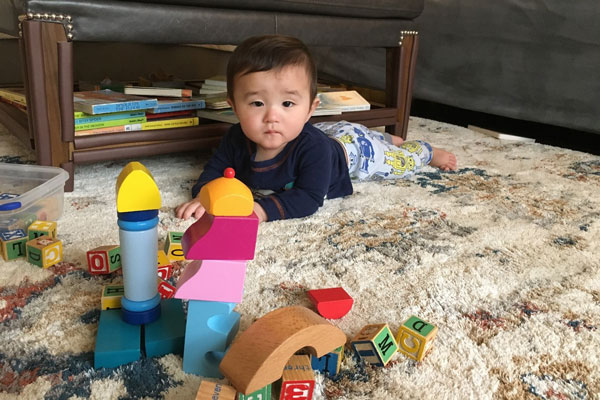 It was exciting when one day in therapy, Milo army crawled across the room and made excited sounds while looking over his shoulder with bright eyes at his mom and me to get us to see a dinosaur sticker that was stuck under a table that we didn’t know was there.

He had an expression of such joy to direct our attention to that dinosaur sticker. Milo started pointing out other stickers that we put on the wall, and he started pointing to toys that we put on a table or chair just out of his reach to encourage him to make sounds and to look at us to express his excitement. Over the course of therapy, Milo made some really nice progress in looking at his mom more frequently and he started to babble more as well as use gestures to communicate with us.

When the program was over, Milo transitioned to some other therapy programs and continued to make nice improvements. I was so inspired to see how hard Milo and his family worked to put him on a path to making such great progress in his social and communication skills.

Today, Milo is a happy and social 3 year old who’s talking in full sentences and doing the things we would expect a 3 year old to do.