Individuals with this condition are treated at the Rett Syndrome and Related Disorders Clinic.

Rett Syndrome (RS) is a neurological disorder often misdiagnosed as autism, cerebral palsy or non-specified developmental delay. This disorder is caused by a defective regulatory MECP2 gene found on the X chromosome, and is seen almost exclusively in females.

Unlike females, who have two X-chromosomes, males have an X and a Y chromosome. Because males lack a "backup" copy of the X chromosome that can compensate for a defective one, mutations in MECP2 are lethal to the male fetus. This is why RS is found overwhelmingly in females. Rett Syndrome occurs in a variety of racial and ethnic groups worldwide, and is now known to occur from one in every 10,000 to one in every 23,000 female births, but incidence may be far greater as new genetic evidence is discovered.

Development appears normal until 6-18 months of age, followed by loss of acquired speech and hand skills, slowing of head growth and development of stereotyped repetitive hand movements (i.e., handwashing, hand wringing, hand tapping, hand clapping and hand mouthing), loss or difficulty with mobility. Stereotyped hand movements may change over time, and additional problems may include seizures, breathing irregularities (hyperventilation and apnea), teeth grinding and curvature of the spine (scoliosis). Approximately 99.5 percent of RS cases occur only once in a family. Barring illness or complications, survival into adulthood is expected. 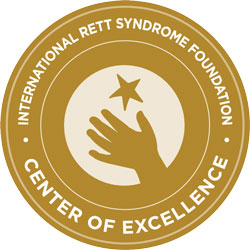 Kennedy Krieger Institute is one of 15 institutions in the United States that has been designated as a Center of Excellence by the International Rett Syndrome Foundation.