Help raise awareness and support our research and education for children like Julia. 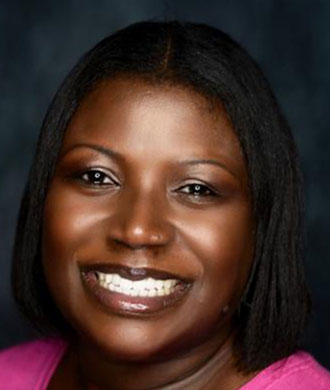 Melanie Pinkett-Davis is assistant vice president for Clinical Services at Kennedy Krieger Institute. Prior to her current role, she was the Clinical Director for the Center for Autism and Related Services (CARD).

Melanie Pinkett-Davis graduated from Morgan State University in 1998, with a bachelor's degree in psychology. She received her master's degree in social work from the University Of Maryland School Of Social Work in 2002. Following a Maternal and Child Health-sponsored master’s level field placement at Kennedy Krieger Institute, she worked in a split position as a clinical social worker in the Institute's Child and Family Support Center and PACT’s Center for Comprehensive Services.

Pinkett-Davis' career at Kennedy Krieger Institute began in 1999. At that time, she worked within the Pediatric Feeding Disorders Program. Working in this interdisciplinary role provided her with an intimate understanding of the comprehensive needs of children with developmental disabilities. She has been nominated for the Institute’s William Hersey Service Award for several years. In 2004, she received the Tom Sengel Award of Excellence in honor of her dedication and service to families.

She has served as a field instructor for social work students from the University of Maryland at Baltimore School of Social Work, McDaniel College and the University of Maryland, Baltimore County. She has received extensive training working with children with attachment-based disorders, individuals with anxiety disorder and families from culturally diverse backgrounds. Her special interests include family adaptation to receiving an autism spectrum diagnosis for their child, collaboration within the interdisciplinary process, cultural diversity and working with community partners to advocate for early identification/early intervention for children with developmental delays.

Help raise awareness and support our research and education for children like Julia.