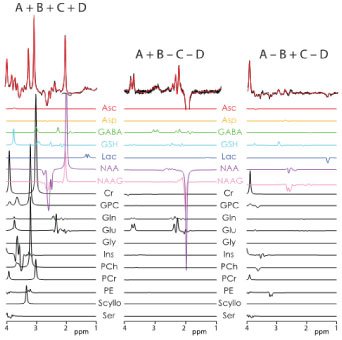 Edited MRS relies on tailored acquisitions to selectively detect lower-concentration (~1 mM) metabolites of particular biological interest that are not well visible or easy to distinguish from other signals in the proton spectrum due to overlap. Examples are the inhibitory neurotransmitter GABA or the redox compound glutathione. Until recently, editing experiments typically were geared towards detecting one metabolite per 10-minute acquisition, limiting the scope of clinical studies that can be designed. Using an approach called Hadamard-encoded editing, we recently developed an approach to edit for multiple metabolites simultaneously. Below is an example where we combine this approach with multi-spectrum linear combination modeling (msLCM) using four pulse combinations (A,B,C,D in the figure) in a single 10-minute experiment. This so-called HERCULES (Hadamard Editing Resolves Chemicals Using Linear-combination Estimation of Spectra) method can resolve signals from neurotransmitters and neuromodulators (glutamate, GABA, aspartate, N-acetylaspartylglutamate), redox compounds (glutathione and ascorbate) and other metabolic markers (lactate, N-acetylaspartate and others). This method is being applied by our collaborative projects to investigate metabolic changes in healthy aging, mild cognitive impairment and Alzheimer’s Disease, as well as a number of psychiatric and neurodevelopmental disorders.