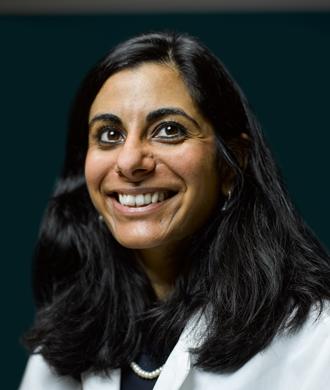 Samata Singhi, MD is the medical director of the Epilepsy Monitoring Unit at the Kennedy Krieger Institute and an assistant professor of Neurology and Pediatrics at The Johns Hopkins School of Medicine.

Dr. Singhi completed her medical school training at Case Western Reserve University School of Medicine where she served as the American Medical Student Association’s national leader on health policy as well as the vice president of the Case Western chapter of the American Medical Association. During this time, she collaborated with Dr. Michael Johnston’s team at Kennedy Krieger Institute and successfully completed a project investigating white matter injury in cerebral palsy using diffusion tensor imaging (DTI). For her research, she was awarded the Child Neurology Society’s Young investigator award. She was also awarded the Doris Duke Foundation national fellowship and furthered her previous research by using DTI to investigate maturation of the pediatric spinal cord with Dr. Thierry Huisman at Johns Hopkins University division of Neuroradiology.

Dr. Singhi did her neurology residency at Boston Children’s Hospital / Harvard Medical School, where she also served as a chief resident of the program. During this time, Dr. Singhi won several institutional awards including the Farley Award and Von L. Meyer award at Boston Children’s Hospital. In addition, she was also selected as one of the fifteen nationwide recipients of the American Academy of Neurology Enhanced Leadership awards.

Dr. Singhi completed her epilepsy fellowship at the Johns Hopkins Hospital Comprehensive Epilepsy Center. She is board certified in Child Neurology as well as Epilepsy.

Dr. Singhi's clinical interests include characterization and management of epilepsy in neurogenetic and neurodevelopmental disorders as well as management of epileptic encephalopathies. In addition, she is keenly interested developing in health policy initiatives and systemic incentives that increase access to specialist care for children with epilepsy.