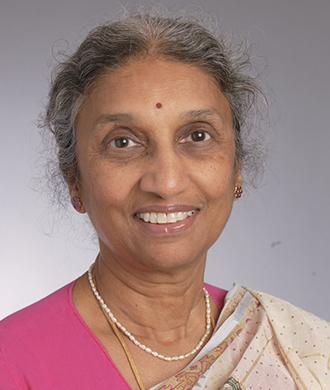 Dr. SakkuBai Naidu is a research scientist in the Department of Neurogenetics at the Kennedy Krieger Institute. She is also a Professor in the Departments of Neurology and Pediatrics at the Johns Hopkins University School of Medicine.

Dr. Naidu received her undergraduate and medical training at Madras Medical College in India. She served internships and residencies in Pediatrics at hospitals in Madras and in Brooklyn before accepting a fellowship in Pediatric Neurology at the Albert Einstein College of Medicine in the Bronx. She worked in hospitals in Chicago at the University of Illinois and Loyola University in Maywood, IL. In 1983, she trained in Neonatal EEG/Neurology at Port Royal Hospital in Paris. She came to Hopkins in 1984 as a Joseph P. Kennedy, Jr. Foundation Scholar. Dr. Naidu works as a Pediatric Neurologist at Kennedy Krieger Institute (KKI), where she directs KKI's Rett syndrome research.

Rett syndrome (RTT), a neurodevelopmental disorder predominantly affecting females, is characterized by a period of apparent normal development followed by loss of developmental skills, primarily expressive language and purposeful hand use. It is associated with stereotyped hand movements, gait disturbance, seizures, irregular respiration, and deceleration of head growth. The genetic defect causing the disorder was mapped to chromosome Xq28 and identified to be secondary to mutations in the MECP2 gene.

Dr. Naidu is a trained pediatrician and neurologist with special interest in developmental and neurogenetic disorders affecting children and adults. Combining careful clinical analysis with technological advances in neuroimaging, genetics and neuroscience, Dr. Naidu is able to accurately characterize neurogenetic disorders. Her activities are at the interface between clinical neurology and basic sciences. Work involving this interface provides a unique opportunity to understand the developing brain, the biological basis of disease and to develop new strategies for prevention and therapy.

Dr. Naidu and colleagues, in addition to having extensively studied the pathogenesis of RTT, proposed a chemical explanation for why older girls with the disorder have fewer seizures, and experience less psychomotor regression than those who are younger. In her work with other neurodegenerative disorders, particularly those associated with abnormalities of the white matter of the brain, Dr. Naidu and colleagues have tested criteria for in vivo MR imaging diagnosis of diseases, usually eliminating the need for a brain biopsy to obtain a definitive diagnosis. She has also demonstrated a novel MRI manifestation of adult Krabbé disease. Dr. Naidu works with unclassified leukoencephalopathies, and has identified newer categories of disorders in which genetic studies use whole exome sequencing.