Pain Rehab Program Helps Patients Get Their Lives Back

Pain Rehab Program Helps Patients Get Their Lives Back

Kennedy Krieger’s Pain Rehabilitation Program helps kids and young adults learn to conquer chronic pain without the use of narcotics.

On the day Faythe was admitted to Kennedy Krieger Institute’s inpatient rehabilitation hospital, she had been experiencing constant pain for the past seven years, following a gastrointestinal illness in 2010. The pain had gradually gotten worse over time, and was unrelieved, despite many previous interventions.

That was in February 2017. At her high school graduation the previous June, Faythe had needed all the strength and determination she could muster to walk across the stage with the aid of a walker. By the end of 2016, she was confined to the living room couch at her parents’ home. She could barely sit up, and she needed her parents to help her do everything.
But Faythe tried one more doctor. As it turned out, that doctor was familiar with the challenges of treating the chronic pain Faythe had been struggling to overcome, and referred Faythe to the Pain Rehabilitation Program at Kennedy Krieger.
The program’s outpatient team, which is directed by Dr. Irfan Suleman, assistant professor of pediatric anesthesiology at the Johns Hopkins University School of Medicine, examined Faythe, performed an extensive workup on her, and recommended she be admitted to Kennedy Krieger’s inpatient rehabilitation hospital for comprehensive pain rehabilitation.
Initially, “the idea of staying in a hospital was really nerve-racking and scary,” Faythe says, “but on the first day, everyone made me feel really comfortable, like I really belonged there.”
During her stay at Kennedy Krieger, Faythe’s rehabilitation plan included occupational, physical and behavioral therapies for several hours a day, six days a week. Therapeutic outings and interaction with therapy dogs—a favorite activity for Faythe, who loves animals—were just some of the activities designed to help Faythe re-engage with the community. 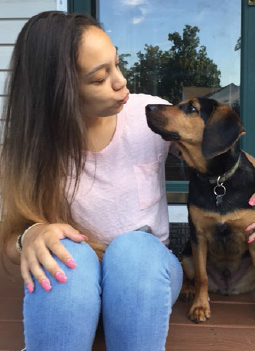 At first, she worked on re-mastering simple movements, like getting out of bed and taking small steps with a walker. Physical and occupational therapists guided and encouraged her through every movement, which she practiced over and over again, getting stronger every day. The stronger she got, the less pain she felt. The more she practiced, the more confidence she had in her abilities.
Behavioral therapists used cognitive behavioral therapy to teach her coping strategies like deep breathing exercises and mindful meditation to help her deal with the pain that she did still feel. Soon, she was walking again, and even climbing stairs, says Alissa Marzetti, Faythe’s primary inpatient physical therapist.
“We helped her break the cycle of thinking a movement would cause so much pain,” says Jacqueline Wineholt, Faythe’s primary inpatient occupational therapist, “and helped her retrain her brain into thinking she could move without pain—or without quite so much of it.”
“We used all the tools we had in our toolbox to rehabilitate her,” Dr. Suleman adds.
Faythe stayed at Kennedy Krieger’s inpatient hospital for nearly eight weeks, improving every day. All of her progress was accomplished without narcotics.
Having entered Kennedy Krieger in a wheelchair, Faythe left the Institute’s inpatient hospital on her own two feet. She continued to improve at the Institute’s Specialized Transition Program, a neurorehabilitation day hospital.
At the day hospital, Faythe received daily occupational and physical therapies and behavioral services for an additional four weeks, to help her complete a successful return to her home and community. Her goals included walking with a smoother gait and regaining arm strength, in order to do things like prepare a meal and walk a dog, says Haley Holt, Faythe’s occupational therapist at the day hospital.
Faythe has continued to make progress through ongoing therapy and gym workouts. Her pain is now manageable, and she’s gained back a lot of independence. This past summer, she adopted a hound puppy, whom she named Deacon. This past fall, she started college with the intention of majoring in biology.
When Faythe returned to Kennedy Krieger for a follow-up appointment last September, she showed Holt a photo of Deacon. “I’ll never forget her showing me that photo,” Holt says. “I knew how much she loved animals, and knowing that she felt she was in a place now where she could manage a dog and do all the things needed to care for her pet—that made me really happy.”