Morgan loves lacrosse and soccer, and is known for her high energy and athleticism. But a sledding accident threatened to change that.

During an afternoon playing in the snow, Morgan’s sled veered out of control and her head collided with her big sister’s. No one knew it at the time, but Morgan had sustained a concussion. Her mother, Lizzy, called her pediatrician’s office, and the nurse practitioner advised watchful waiting. Later that day, Morgan began showing worrisome symptoms. She seemed lethargic and irritable—out of character for the active 7-year-old. “I saw her demeanor changing; her coloring had changed,” recalls Lizzy. “She was not her happy, bubbly self.”

Morgan’s mom knew something was wrong and called the pediatrician again, asking to be seen. The doctor took a look and sent them to the emergency room. A brain scan showed no swelling or bleeding of the brain, but revealed a broken orbital bone, for which she was referred to an eye specialist. They left the ER with a concussion diagnosis, but no clear care instructions other than to avoid sports until her symptoms stopped. Fortunately, Morgan’s mom recognized the seriousness of concussion. She turned to Kennedy Krieger for her daughter’s care. Morgan underwent a thorough evaluation by specialists which included medical, cognitive, and motor testing. Doctors explained that if Morgan resumed all of her typical activities too soon, she would prbobably feel worse in the short-term, and her brain would not have the chance to properly heal before she might get hit again. Initially, while she was encouraged to go for walks for exercise and work up to light jogging, she was instructed not to do any full running or jumping, no climbing, and no sports, which was devastating to Morgan, who had recently made the travel lacrosse team. Even sedentary activities like watching TV or reading for too long might make her feel worse temporarily. Doctors gave her a detailed concussion care plan to follow at home and school. 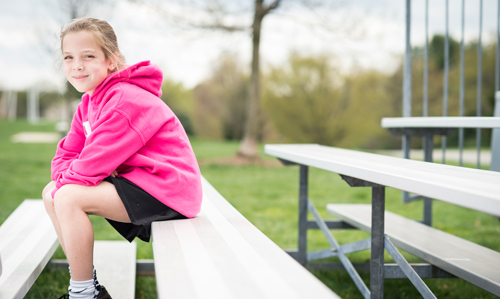 “It was very scary, very hard, because she is so active and just loves running,” says Lizzy. “But we knew that if she had a second concussion on top of the first one, the damage could be lasting—it could be a forever injury.” Concussion care is complex; unlike with a broken arm in a cast, you can’t see into the brain to find out its condition. And with a 7-year-old, it can be difficult to discern normal behavior from nuanced symptoms, like irritability. But Morgan was in good hands. Kennedy Krieger’s experts have been treating children with brain injuries for nearly 40 years, and its researchers are at the forefront of investigating the best ways to diagnose and treat concussions and prevent long-term effects on the brain.

Through a series of follow-up visits at the Institute, specialists continued evaluating Morgan’s progress and refining her recovery plan. She was gradually allowed to resume more activities, while being monitored for any increase in symptoms. Eight weeks after her injury, doctors determined that it was safe for Morgan to return to all normal activities, including lacrosse. Morgan was able to join her team for the last half of the lacrosse season. Her first game back, she scored a goal. Morgan’s mom is grateful for her daughter’s progress and for the doctors who treated Morgan. “I learned so much from the doctors at Kennedy Krieger,” she says. “I left the ER without an education, whereas at Kennedy Krieger the doctors sat down and had a long talk with us about concussions. I left with a plan for what she was and was not allowed to do that I could share with her school and with her coaches.”