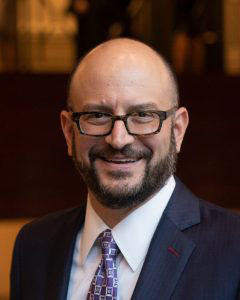 Dr. Bradley L. Schlaggar (Honors ScB Brown University 1986; MD/PhD Washington University 1994) is the President & CEO of Kennedy Krieger Institute in Baltimore, MD, where he holds the Zanvyl Krieger Faculty Endowed Chair.  He is a Professor of Neurology and Pediatrics at Johns Hopkins University School of Medicine. Prior to moving to Baltimore in August 2018, Dr. Schlaggar was the A. Ernest and Jane G. Stein Professor of Developmental Neurology, in Neurology, and Professor of Neurology, Radiology, Neuroscience, Psychiatry, and Pediatrics, at Washington University in St. Louis School of Medicine. In 1999, he completed his pediatric neurology residency training at St. Louis Children’s Hospital and Washington University. From 2014-2018, he served as the Head of Pediatric & Developmental Neurology, co-Director of the Intellectual & Developmental Disabilities Research Center, and Neurologist-in-Chief at St. Louis Children’s Hospital. He served as the Pediatric Neurology Residency Director from 2005-2013. He has received numerous awards for research, mentorship, clinical care, and community service, including the Philip R Dodge Young Investigator Award from the Child Neurology Society, the Humanitarian Award from the Tourette Association of America, the Norman Geschwind Award for Behavioral Neurology from the American Academy of Neurology, the E. Mead Johnson Award from the Society for Pediatric Research, and the Frank Hatch Award for Outstanding Community Service from the John Merck Foundation.  Dr. Schlaggar’s research efforts, funded primarily by the NIH, are directed at understanding the development of the brain’s functional network architecture in typically and atypically developing children.  He has been deeply involved in the training of medical students, graduate students, fellows, and junior faculty. At Washington University, Dr. Schlaggar was the PI for the Neurological Sciences Academic Award (NSADA)-K12 for 10 years from 2008-2018. 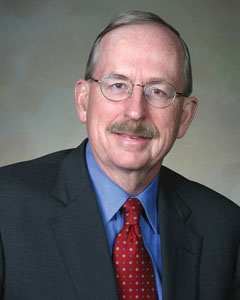 Michael V. Johnston, MD is the Associate Program Director of the CNCDP-K12 grant from NIH-NINDS. He has been in a leadership position at the Kennedy Krieger Institute and a Professor of Neurology and Pediatrics at Johns Hopkins since 1988. He trained in pediatrics and pediatric neurology at Johns Hopkins, and he also spent two years in the laboratory of Joseph Coyle, MD studying neurotransmitters and neuropharmacology in the Department of Pharmacology at Hopkins. After this training he was recruited to be an Assistant Professor at the University of Michigan in the Departments of Pediatrics and Neurology by Gary Goldstein, MD, the Director of Child Neurology at Michigan who had recently moved from UCSF.  During this time he faced the “what am I going to work on” problem of young clinician-scientists seeking their own identity and started to explore ways to protect neonatal rat pups from hypoxic-ischemic brain injury.  He received his first NIH funding through an NIH-NINDS Teacher Investigator Award at Michigan, and after moving back to Baltimore to the Kennedy Institute and Hopkins he set up the Neuroscience Laboratory and received a Javits Neuroscience Investigator Award from NINDS.  The focus of his scientific work has been on laboratory neuroscience that can be translated into clinical therapies for children with neurological disorders. He has been very fortunate to work with talented young trainees in the laboratory and outstanding faculty collaborators at Michigan, Kennedy Krieger and Hopkins. He recruited a stellar national team of child neurology clinician-scientists including Drs. Amy Brooks-Kayal and Barry Kosofsky as Co-Directors and the members of the Scientific Advisory Committee and Counselors for this new CNCDP-K12 program. He believes that in addition to talented young faculty with new ideas, the major determinants of success as a clinician scientist in child neurology are dedicated time devoted to research in the early years  and outstanding mentors and mentoring. Success is not an accident, it can be taught. 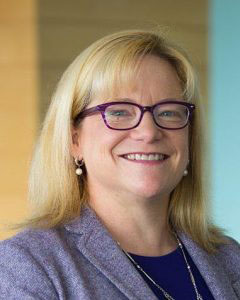 Amy Brooks-Kayal, MD is Professor of Pediatrics, Neurology and Pharmaceutical Sciences and Chief and Ponzio Family Chair of Pediatric Neurology at the University of Colorado School of Medicine and Children’s Hospital Colorado   Dr. Brooks-Kayal trained at Johns Hopkins University, University of Pennsylvania and Children’s Hospital of Philadelphia.  She joined the University of Colorado in 2008 after 13 years on the faculty at University of Pennsylvania and Children’s Hospital of Philadelphia.  Her area of clinical expertise is pediatric epilepsy.  Her research focuses on the effects of seizure activity on neurotransmitter systems with particular emphasis on understanding the regulation of GABAA receptor expression in development and epileptogenesis, and development of new therapies for epilepsy.  Dr. Brooks-Kayal is an active member of multiple professional societies including Child Neurology Society, American Neurology Association, American Academy of Neurology, Society for Neuroscience, and American Epilepsy Society of which she is the past President.  She acted as Co-Chair and Steward for the National Institutes of Health (NIH) Epilepsy Research Benchmarks, is the former Chairperson of the NIH CNNT Study Section and currently is a member of the NIH National Institute of Neurological Disorders and Stroke Advisory Council.

Dr. Brooks-Kayal’s roles in the CNCDP are Executive Committee member and Scholar Selection and Oversight 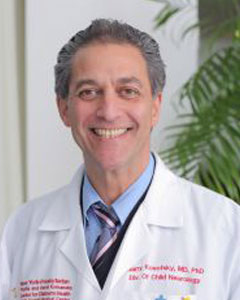 Dr. Barry Kosofsky is the Horace W. Goldsmith Foundation Professor of Pediatrics, Pediatrics in Radiology, Neurology, and Neuroscience at Weill Cornell Medical Center, where he directs the Horace W. Goldsmith Foundation Laboratory of Molecular and Developmental Neuroscience. He is an Attending Pediatrician and Chief Emeritus of the Division of Pediatric Neurology at NewYork-Presbyterian/Komansky Children’s Hospital. He is Board Certified in Neurology with Special Competence in Child Neurology, and in Brain Injury Medicine. In addition to his clinical and administrative roles, Dr. Kosofsky is a clinician scientist who has developed and studied animal models of diseases which affect human brain development. The goal of his preclinical studies have been to gain mechanistic insights into such developmental brain disorders, as a starting point for improved diagnosis and potentially therapy for affected infants and children. This approach has included the use of sophisticated brain imaging methods as a foil for bi-directional translational research, which he has applied to the fields of gene therapy for neurogenetic disorders, autism, and traumatic brain injury in human subjects. The current focus of his research is identifying functional biomarkers predictive of ongoing symptoms following mild traumatic brain injury (mTBI). That effort includes the use of visual tracking, structural brain imaging, and functional assessments of vision, balance, and exercise tolerance. His research program now centers on the study of biomarkers of autonomic dysfunction, as a means of improving our ability to diagnose mTBI, and as a starting point for individualizing therapy for adolescents and adults with persistent post-concussive symptoms.

Dr. Kosofsky’s roles in the CNCDP are Executive Committee member and Retreat and Curriculum Oversight. 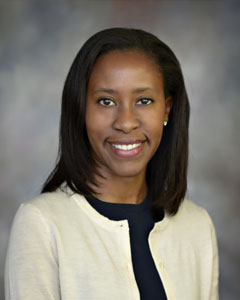 Dr. Erika F. Augustine’s clinical research is focused on the development of new therapeutics in rare neurological diseases and includes FDA-funded research in Juvenile Batten Disease. She has also been active in programs to promote gender and racial diversity in medicine. Dr. Augustine, a practicing pediatric neurologist and movement disorders specialist, will direct activities supported by the grant to increase gender and racial diversity in the pediatric neurology research community. Specifically, she will focus on activities that in the short-term promote the awareness of NIH funded research opportunities among child neurologists of diverse backgrounds and over a long time-span increase awareness and interest in the field of Child Neurology as a whole. 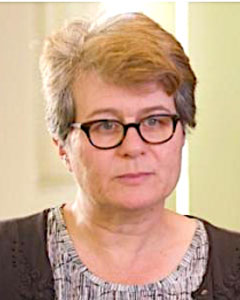 Dr. Brenda Porter has clinical and research interests in pediatric epilepsy. Her current research is on tuberous sclerosis and other rare genetic epilepsies. She joined the CNCDPK12 due to a strong interest in mentoring and promoting the careers of pediatric neurologist with an interest in research. This includes working with funded scholars to ensure their success but also non-funded applicants to increase the utility of the CNCDPK12 retreat and other events for promoting career development and the research success of all early stage child neurologists.

Dr. Porter’s roles in the CNCDP are Executive Committee member and Mentorship of Scholars and Applicants. 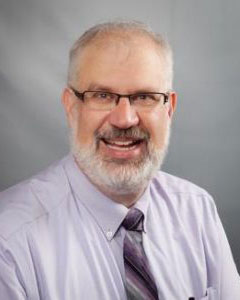 Dr. Mink’s roles in the CNCDP are Executive Committee member and Scholar Mentor. 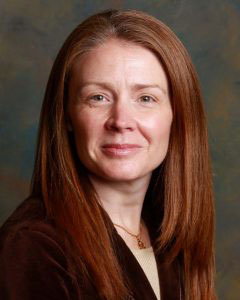 r. Heather Fullerton is a pediatric vascular neurologist with more than a decade’s experience leading NIH-funded multicenter clinical research studies in the field of stroke in the young. She is the Chief of Child Neurology at UCSF and enjoys fostering the career development of junior academic child neurologists. She is the founding president of the International Pediatric Stroke Organization (IPSO), a 501c3 non-profit that aims to bring together health providers of multiple disciplines from around the globe to improve the lives of children with cerebrovascular disease.

Dr. Fullerton’s roles in the CNCDP are Executive Committee member and leadership of the CNCDP Scholar Oversight Program.