Neurodiversity in the Workplace Conference 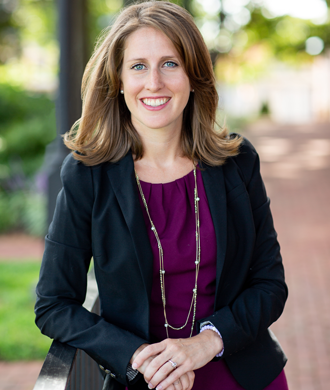 Emily E. Arneson serves as the director of government relations at Kennedy Krieger Institute.  Emily enthusiastically joined the Kennedy Krieger team in 2019 after falling in love with the mission of the Institute while serving as an outside consultant.

As the Institute’s “lobbyist,” Emily advocates on behalf of the students, patients and families served by Kennedy Krieger.  In this role, she has successfully secured millions of dollars in state support for the creation and expansion of important Institute initiatives.  She’s a tenacious advocate for individuals with disabilities through her work on legislation related to education, healthcare and more.  Additionally, she has implemented a Get out the Vote campaign for Kennedy Krieger employees and is currently working on an advocacy curriculum.

Emily has served the last 12 years within private and public sector entities advocating at all levels of government (federal, state, local).  Previously, Emily worked as the Assistant Director of Policy and Government Affairs at the Maryland Department of Commerce. In this role, Emily navigated the legislative process, analyzing, highlighting and developing legislation on topics including economic development, tax credits, tourism and the arts. Actively engaged in the community, Emily collaborated extensively with important stakeholders, sister agencies, and county and local governments. Before the position with Commerce, Emily served in a similar capacity at the Maryland Department of Planning.

Prior to her return to State Government, Emily focused on Capitol Hill federal advocacy. As a Legislative Assistant at Manatt, Phelps and Phillips, Emily’s established experience of Capitol Hill and demonstrated communication skills were instrumental in outreach to hundreds of Congressional offices.

Following graduation from college, Emily had the privilege of working on Capitol Hill for a U.S. Senator, focusing on issues of immigration, judicial reform and government oversight.

Emily is currently a member of the Leadership Maryland Class of 2022 and has received The Daily Record’s Top 100 Women and Leading Women awards.

Outside of work, Emily volunteers as a tutor and mentor in the Seeds for Success program, serves on the Board of the Naval Academy Spouses and Civilian Club, and is a Red Shoe Crew Member at Ronald McDonald House Charities.   She’s an avid reader, powerlifter, and enjoys spending time with family and friends.